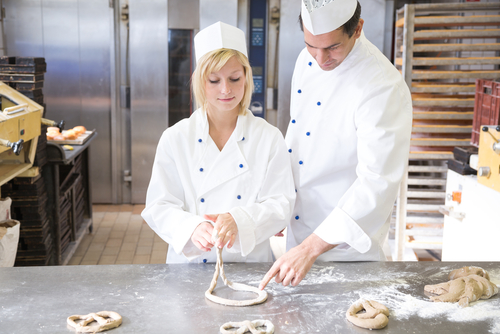 Even more people will get an opportunity to earn while they learn, after more than 20,000 new Apprenticeships have been pledged by employers as part of National Apprenticeship Week.

From Lloyds Banking Group committing to hiring 5,000 apprentices, Greene King and Whitbread pledging 2,000 a piece and EE, Mitchells & Butlers and Starbucks each announcing 1,000 vacancies, announcements have been made by hundreds of businesses around the country.

And National Apprenticeship Week has also seen a boost to the new Traineeships, which give young people the work preparation training, English, maths and work experience they need to get an Apprenticeship or other job.

Employers including the BBC and Port of Tilbury have pledged to give more young people Traineeships – as have Liverpool Football Club through a partnership with Myerscough College. Meanwhile, Westminster Kingsway College has launched a new Parliamentary Traineeship programme so 16-23 year olds can get a chance to gain experience in the corridors of power.

Business Secretary Vince Cable said: ‘The Government is putting an end to the damaging divide between vocational and academic learning. We are committing the biggest ever investment in Apprenticeships and are on track to create two million Apprenticeships over the course of this Parliament.

‘The resounding success of this year’s National Apprenticeship week demonstrates that apprenticeships are deservedly becoming more popular with business of all sizes. Apprentices already contribute £1.8 billion to the economy and with these further commitments, thousands more people will now be able to get the practical skills they need to build careers and help firms grow.’

Today’s announcement follows new research revealing that nearly half (44%) of employers intend to take on one or more apprentice in the next five years.  And research from the Association of Accounting Technicians revealed that apprentices delivered around £1.8bn of net economic benefits to UK organisations in the last year.

The Week has also seen the Prime Minister announce the government’s commitment to creating two million Apprenticeships over the lifetime of the current Parliament. David Cameron also announced the next round of Trailblazer employers; 29 new groups of employers who will lead the transformation of Apprenticeships. The new trailblazers, spanning sectors from accountancy to aviation, nursing to retail, include small businesses and sector specialists as well as some big names such as Tata Steel, John Lewis, British Airways and BMW.

Other announcements during the Week included the launch of new Higher, degree level, Apprenticeships in Space Engineering and Nursing. And to help bring more SME employers on board, further support has been announced including a new online mentoring service, Apprenticemakers. Meanwhile, the AvLive feed of vacancies which training providers and partners can use to promote Apprenticeship vacancies has been upgraded following a successful six-month testing period.

Skills and Enterprise Minister Matthew Hancock MP said: ‘We want to make going to University or into an Apprenticeship the new norm, and over half of young people say they would like to do an Apprenticeship if one were available. So it’s great that as National Apprenticeship Week 2014 comes to a close we can announce that 20,432 new positions are to be created.

‘In order to give young people the best chance possible of securing an Apprenticeship or job and unlock their potential, we need to help them become work-ready. The new Traineeships will be crucial to that.

‘Apprenticeships are delivering for employers, young people, adults and the economy and are increasing at a record rate. Nearly every employer that takes on an apprentice reports benefits to their business, including the ability to grow their own talents.’