Prior to this gadget, I’d only ever used a de-humidifier (to cure rooms of damp), so this was to be a very interesting experiment. I wasn’t previously aware that a ‘moist’ environment had advantages over a dry one, but had read up in preparation for our new bedroom friend. As someone who suffers from dry skin and asthma I was interested to see and feel its benefits. I chose to test it in the bedroom because I’m currently on a break from filming and it’s where I spend the most time (stop sniggering at the back!). I also felt that I’d be more sensitive to any environmental changes up there. I was also encouraged as the Dyson AM10 has been certified by Airmid Healthgroup Laboratories and the British Skin Foundation, as being able to relieve the symptoms of asthma and allergies. 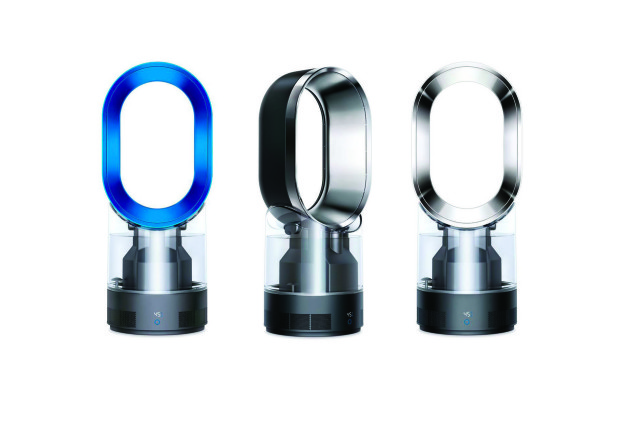 Outwardly the AM10, as is to be expected, looks the part: it is definitely a Dyson and would look great in most rooms.

It comes in five pieces – base, water reservoir, head fan unit, plug and remote. It was a cinch to assemble and, once powered up, could be left to run autonomously or manually (there are 10 different airflow settings to choose from).

Firstly, let’s take a look at the unit’s main features and claims:

Dyson claims that this unit projects its ‘hygienic mist and hydrated air evenly and quietly throughout the room’.

Now, being posh, I decided to fill the tank using filtered water and I suspect that this leads to a longer operating cycle than the stated 18 hours as I didn’t need to refill it for about a week.

The unit needed weekly cleansing and a monthly deep clean lest it begin pumping bacteria into your chosen room.

With regard to the Dyson’s operation, we definitely noticed a more humid room. For a week, a sort of moistness hung in the air – much like what you feel when on holiday in a warm, humid location. There was no doubt that there was an appliance in the room either; it was loud enough for my wife to ask that it be turned off, but quiet enough for me to deal with on nights alone. Operation of the unit was simple and there was no complex set-up. Plus, the dual functionality makes it useful all year round. Dyson have definitely done it again – they’ve produced a gadget that offers a very attractive alternative to what’s out there, but with a designer price tag. I don’t feel I need one in my life, but can’t see any real reason why I shouldn’t have one. Locating one in an office where it doesn’t interfere with peoples’ movement about the space may be an issue (no one likes a fan-hog), however, it could lead to a healthier environment.

I love that the AM10 can be pretty much left alone to do its thing and that maintenance isn’t a bind. I’d like to live with one for longer as I cannot yet comment on its effects on my skin or breathing, but the price tag of £500 is a little too steep for me to consider.

“Outwardly the AM10, as is to be expected, looks the part: it’s definitely a Dyson and would look great in most rooms.”

“I don’t feel I need one in my life, but can’t see any real reason why I shouldn’t have one.”