They say that manufacturing is the foundation of America. But, not just America – the world.

But, many worry that manufacturing is losing ground and that the economy is on shaky ground. Here’s where we’re at right now with modern manufacturing and what’s expected to come in 2016. 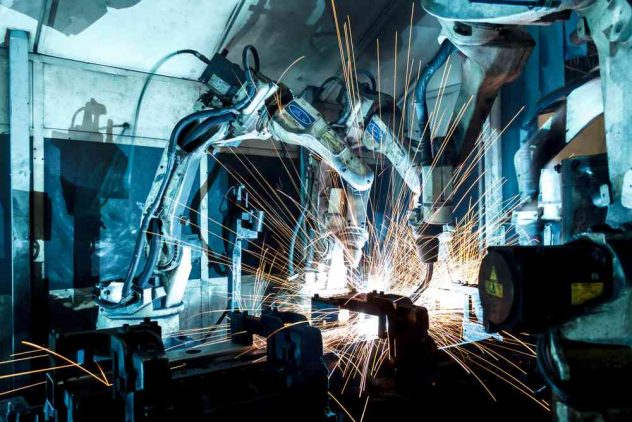 Global manufacturing is expected to grow moderately. Economists and various government organisations are predicting respectable growth in 2016, but nothing that is expected to exceed any records. This also assumes there are no disruptive political or economic events that unwinds the industry or economy.

A 2.6% growth rate is expected in the U.S., China, and India. However, while China and India are in decline, economists see a 6% and 8% growth in these countries in 2016.

European manufacturing growth seems uneven by country, but is expected to grow faster, overall, that in the U.S. The variables in Europe continue to remain the threat of ISIS and terrorism. Companies like Creative Safety Supply LLC CRM will dominate the landscape, helping modern manufacturing companies mitigate risk and grow during turbulent times.

The rise of the machines

Robotics are more affordable than ever before. With the increasing use of general purpose robotics, more and more individuals will have an easier life and this will be because modern manufacturing plants will be able to produce more goods and services at a faster pace and deliver them to consumers. Robotics also mean lower prices as labor costs shrink and the consistency of goods and services increases.

In 2016, manufacturing is expected to evolve from a simple labor-intensive job to a more skill-based one. As robots replace humans, more skill-based tasks will need to be done to keep workers employed, but to also grow the industry and create new technologies that will enhance all of our lives.

Entirely new skillsets will need to developed, which may force manufacturers to encourage or pay for new educational initiatives. Skillsets may include more computer-oriented training, high-skill programming and design work, and even tradesmanship.

While some speculate that a rise in robotics means a lower labor force, many are still not convinced. When companies make more money, they tend to reinvest in the company for more profits. And, those reinvestments tend to come in the form of research and development, enhanced products, and increased high-skill labor. That means more jobs, not less.

The Internet of Things

Another innovation is coming in 2016: the Internet of Things. Most people already know that their smartphone and tablet can connect to the Internet. And, newer technologies are being developed with the same Internet connectivity once reserved only for personal computers.

As the manufacturing industry continues to rely on data to make operations more streamlined, they need on-demand access to that data and ways to communicate in real-time with vendors about supplies and inventory. Enter, the Internet of Things.

While the consumer side of the IOT is slowly gaining traction, many believe that the manufacturing industry will see a major boost in the number of connected devices.

By some estimates, the number of connected machines is expected to be over 30 billion. This new wave of technology and manufacturing is being dubbed “Industry 4.0.”

The benefits of the IOT movement include predictive maintenance on machinery, and increased supply chain visibility, a reduction in the gap between production and people at the corporate level, and improved communication.

The IOT also means a more congested Internet, which may drive growth and innovation in the IT sector to figure out how to deliver services without eating up valuable bandwidth.

When Apple introduced the iPhone, it revolutionised the smartphone industry. But, another revolution is coming: personalised merchandise. Until very recently, marketing and manufacturing have been separate and distinct departments within companies. However, a manufacturing team could develop a product and then marketing could pick up from there and bring it to the consumers. Going forward, customers may be able to buy customised clothing, hearing aids, phones, and even appliances to suit their individual needs and even the layout or design of their home.

More 3D Printing – 3D printing isn’t being seen as the transformative technology it was predicted to be for consumers. But, for manufacturers, it’s a boon. Now manufacturing can capitalise on lower production costs, totally customised machinery, and a more custom user experience.

3D printing allows manufacturing to print products on a more customized basis, charge lower prices and retool machinery cheaply. This will help drive innovation in auto manufacturing and other sectors.