Oliver Hammond is back on the road to review the best business cars for Talk Business. This month he has taken the Audi RS3 for a spin. 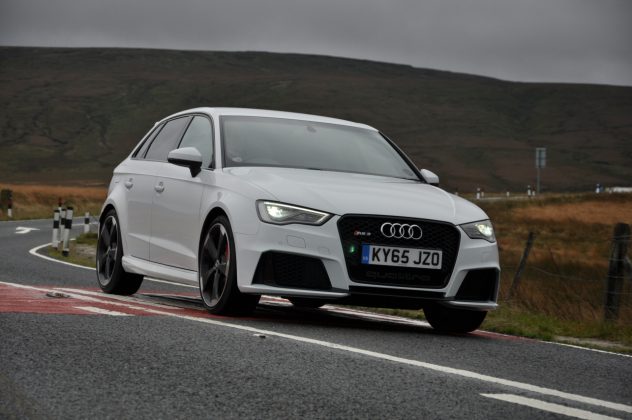 Last year, its father, the RS6, rocketed into my personal road-testing history book as one of the finest, most incredible machines ever made, blending relatively discrete styling, copious space and a near-impeccable interior with absolutely devastating pace. Unless driving an estate is a necessity, though, perhaps the more compact RS3 with its lower price point is just as capable at making the hairs on the back of one’s neck stand up – which is what I set out to ascertain. 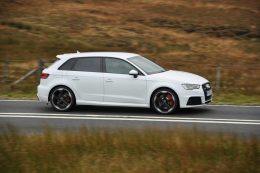 Mega, hyper, super-hot; call this hatch’ whatever you fancy, so long as it aptly encapsulates the 362bhp RS3’s mental 0-62mph time of 4.3 seconds, which is actually faster than its R8 uncle by 0.3 of a second. In a straight-line drag race, Audi’s 2.5-litre pocket rocket trounces its rivals, leaving them red-faced. It’s the most discretely-styled of the bunch, too, certainly more restrained than the loud and proud Focus RS, the A45 AMG with its tell-tale rear spoiler and also the Golf R400, due for release later this year. Granted, the test car’s Glacier white metallic paint accentuates the sharply-chiselled RS3’s subtly flared bodywork, and the gaping exhausts at the corners of the rear bumper kind of give the game away, but it’s otherwise relatively restrained. The standard 19-inch ‘5-arm Rotor’ alloys look fabulous in anthracite black high-gloss finish, and specifying Quattro lettering for the front air intake certainly gives the car a final aesthetic sheen. 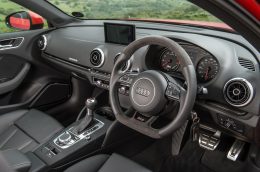 Inside, the RS3 is unarguably constructed immensely solidly, although perhaps lacks the ultimate quality of its larger and more expensive relatives, feeling slightly more plasticy to the touch in certain places. The optional black fine Nappa S super sport seats look splendid with their sculpted design and quilted stitching, proving superbly comfortable and supportive, too. The sat nav in the RS3 rises up out of the dashboard cohesively, not appearing bolted on like Mercedes’ efforts of late. All primary controls are ergonomically excellent, the flat-bottom, Alcantara steering wheel and aluminium pedals ratchet up the sporty aura, and the RS3 logos dotted around the cabin appear classy, far from cheesy. Manually-adjustable front seats as in the test car will feel peculiar, the upgrade to powered adjustment advised, and whilst rear headroom is quite generous, legroom is relatively cosy. With 280 litres of boot space on offer with the back seats in use, expanding to 1,120 litres after they’re folded, the RS3 is numerically beaten by the A45 AMG, the Audi partly hindered by the position of the battery and the tyre-sized Bang & Olufsen subwoofer. It remains generally practical in size and shape terms, though; a hyper-hatch that is genuinely useable by a 2+2 family all year round. 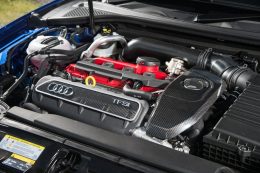 I regularly bemoan performance cars being too quiet unless they’re flogged, which isn’t abundantly feasible on UK roads, lack of aural excitement at middling speeds somewhat diluting the overall experience they create. Even some models’ optional sports exhausts don’t really bring any fireworks to the party. Fortunately for the RS3, though, the dual-branch RS sports exhaust system included as part of the Dynamic package (£1,495) or Dynamic package plus (£2,495) serves up an intoxicating array of sounds. There’s a lovely burble at startup, a joyous roar when accelerating from a standing start either normally or with Launch Control, cheeky pops and bangs on the overrun at moderate speeds, and full-on howling in the upper echelons of the rev’ counter. 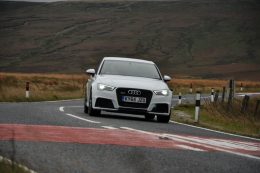 Audi’s handbag-sized gem hurls itself towards the horizon alarmingly swiftly in a manner that would make the faces of its RS6 father and R8 uncle blush with pride if such a thing were possible. Producing 465Nm of torque is probably something to do with it. The ride is a tad firm and fidgety in urbanity and a degree of road and tyre noise can be detected at differing speeds, the RS3 primarily coming alive as its surroundings transition from grey to green. In Dynamic mode, the Magnetic Ride and RS Sports Suspension setup with its adaptive dampers does a commendable job at keeping this insanely rapid car in check over undulating surfaces and in the bends, where grip is plentiful thanks to Quattro four-wheel drive. Wet weather really doesn’t present much of a barrier between the RS3 and large dollops of hatch’ fun. The electromechanical steering undeniably lacks feel and the Audi doesn’t feel as agile in the bends as it perhaps could have been. Direction changes are dealt with impressively, though, and the seven-speed S tronic gearbox shifts smoothly and briskly when left to its own devices, although using the flappy paddles is recommended in order to maximise driver engagement.

Prospective RS3 Sportback owners won’t be too concerned over the car’s environmental credentials, but with CO2 emissions of 189g/km, BIK at 32% and claimed fuel consumption of 34.9mpg combined, the Audi’s isn’t the greenest in the class. After 200 miles of driving including city centre commuting and pedal-stomping hooning, I averaged just shy of 27mpg. 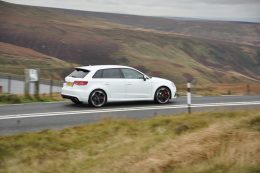 If the steering felt more alive and essentials like cruise control were included as standard as part of the £40,795 starting price, the RS3 Sportback with its everyday usability and ballistic pace would prove hard to topple as the mega-hatch of choice. Purists may prefer the rear-wheel antics offered by BMW’s M135i and M2, the more competitive price of Ford’s Focus RS, or VW’s brilliant all-rounder, the Golf R. For me, though, the RS3 Sportback with its sophisticated image, splendid interior and bonkers all-weather performance gets my vote.

How to save for a car

Getting a PCP car finance deal with poor credit

Owning v leasing company cars: Which is better for a small business?

What does the future of the automotive industry look like?

What to do after a traffic accident

The significance of photos in car accident lawsuits

How packaging colour affects the sales of the products?

Dominic Lill - January 3, 2017 0
The packaging of any product plays a decisive role in its marketing and persuading the customers to buy it. Attractive, colourful and striking packaging...