If you own or run a small business, you probably have to do at least some printing every week or month, be it invoices, reminders, mailshots or just company newsletters. You may have been using inkjet printers for a while because the printer was cheaper, but you’ve found that over time your printing needs have changed and you need sharper lettering or images. It may be time to look at a laser printer, in this case. 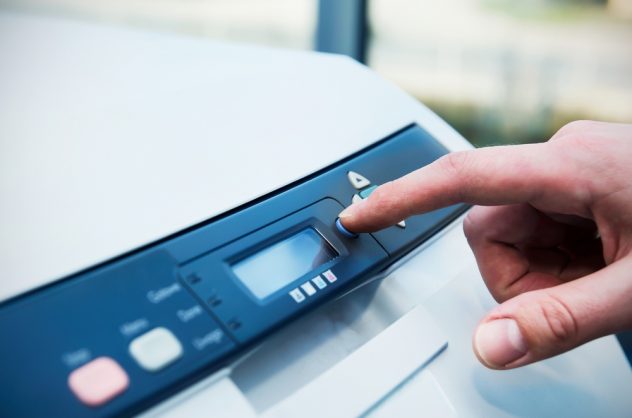 How does a laser printer work?

A laser printer uses, as you might imagine, a laser beam. It’s not the laser that does the printing, though (some people have thought that the laser burned the surface of the paper to produce lettering!). What the laser actually does is blast a spinning drum with light so intense that it changes the electrical charge on the drum in the shape of the words or images to be printed. These areas are negatively-charged and when the roller spins through the toner particles, they stick to the charged areas, before being transferred to the paper.

Toner particles are made from carbon or other pigments, combined with a low melting point polymer, and the transfer process involves heat and pressure, to melt the polymer into the paper, carrying the pigment with it to create the character or image. Laser printers are the most accurate and rapid printers available right now, with resolutions ranging from 300-1, 200dpi, so this technology has significant advantages over inkjet machines.

The advantages of laser

It’s quite easy to keep your laser printer topped up with toner; you may have been buying cheap ink cartridges at Cartridge People before, so you’ll be pleased to know that the same sort of deals are available for laser cartridges.

In operation, laser printers are much quicker than inkjet and they’re also much more accurate, offering pin-sharp print-outs that look more professional and high-end than inkjet versions.

You’ll also find that laser printouts are less likely to smudge or fade out than inkjet, meaning fewer mistakes and discarded print-outs. In addition, laser cartridges collect unused toner and send it back to the tank, so there’s less waste than there is with inkjet, which is great for your budget and the environment.

The disadvantages of laser printers

A lot of people are discouraged from buying a laser printer because they tend to cost more than inkjet types initially. However, this disadvantage isn’t really such a huge problem because the on-going costs of toner tend to be lower than replacing inkjet cartridges over time.

Toner cartridges tend to be a bit bigger than ink cartridges as well, which may present a problem if space is tight, but this is hardly insurmountable.

Choosing between laser and inkjet comes down in part to how much you have to print each month and how rapidly you need to do it. Higher volumes of printing will make a laser printer a better investment, while lower volumes may make inkjet work out cheaper for you.

Whichever model you choose, make sure you have a great supplier of inks and toners – read reviews and feedback to find a reliable and cheap source.

Common problems small businesses face and how to solve them

Dominic Lill - June 15, 2017 4
Running a  profitable small business among a sea of competitors and larger companies is no mean feat and a myriad of problems lurk along...
We use cookies. To learn more, read our Privacy Policy.Ok