Have you ever been in a rush to get to someplace? Perhaps it’s on the day of an important meeting, or conference, and you’ve spent a good while planning, prepping and getting dressed up for the big day. Then once you’re off down the road, you suddenly find yourself at a roadblock. You fluster to find another route, but when you do that’s congested too, and there’s no way to go.

This is often how it feels being an entrepreneur attempting to grow their business. I very often encounter aspiring entrepreneurs with brilliant, original ideas who are sure that their pioneering turn will be an overnight success but often don’t consider their business barriers. 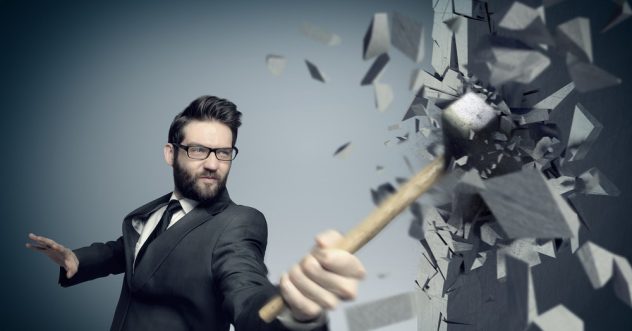 In reality though, overnight success is a years-long project – nothing ever goes perfectly according to plan, and you will often encounter barriers along the way, which could be anything from market shifts and changes in legislation to unfortunate accidents and unreliable colleagues. Some barriers come in the form of others’ negativity, which can be worsened if we start to emulate it. However a business barrier presents itself, we know it is not welcome to stay, and nobody likes unforeseen circumstances coming along and stifling their success.

A long while of encountering my own business barriers gave me considerable experience in handling and overcoming such situations. When I began to advise other entrepreneurs on how to do the same, they would notice a sudden surge in success. But it wasn’t because the barriers had disappeared – people were just becoming better prepared and more resilient. This, in part, prompted me to establish the Entrepreneur Academy London, and chase my vision of 200 entrepreneurs changing their lives through business.

We all know that when a barrier is removed or things flow a lot quicker. The time it takes to achieve business goals is should actually be pretty quick. The only thing that makes it such a long process for others is the barriers.

We all know that the tide flows easier when the barrier is removed, and if it weren’t for such hindrances, the path to business success would be relatively quick.

So what exactly was it that enabled me to demolish my barriers? I have been asked many times, and people are often surprised by my confidence in the face of the same barriers that see other businesses crumble. I have always stayed true to three basic principles, which have acted like golden keys through the barriers. They are:

The skills we pick up directly create the opportunities we receive, and the more skills you have, the more barriers you can destroy. Skills are a worthwhile investment in your future, so don’t ever begrudge spending time, effort or money on gaining skills, as you are improving your human capital and becoming of higher value to others.

Cristiano Ronaldo, for example, is skilled at football in ways unequalled by others, hence his being the most expensive footballer on the planet. In this competitive era, traditional academic qualifications are insufficient for breaking barriers: you must distinguish yourself from others by learning all you can. Put in the effort to acquire skills, and you will see the merit it brings.

It is said that a start-up business requires relationships, resources and finance. Fortunately, I have found that provided the right relationships are in place, the resources and finance often come with the turf. Never underestimate the importance of building a network. In the past, I have got to the next level because of someone offering me assistance, and likewise, I have done the same for others. On occasions that none of my skills were directly relevant, one of my contacts could help. Smart, efficient businesses help each other along, and leverage off one another.

Inspiration is key, as it often acts as a trigger to action. For this reason, it is very important to maintain a figure of inspiration – preferably one other than money, as times of difficulty will see you lacking in motivation. Attaching yourself to a higher purpose can keep us going at the toughest of times, and able to continue on the road to success.

These three golden principles will enable any entrepreneur to overcome business barriers, and are at the core of the Entrepreneur Academy London. We have business coaches on offer to all members to develop skills, and have obtained the support of business gurus such as James Caan, Brad Burton and Kanya King. The success stories of such figures help to inspire and motivate our members to achieve their dreams, regardless of their circumstances.

Back in the traffic jam, I was glad to have nowhere important to be, while everyone around me screamed and waved and honked their horns. Then suddenly, a young man abandoned his convertible in the centre of the road and began to make his way on foot. This is the exceptional determination you’d expect in an entrepreneur.

As I watched him run past the other congested cars and the big roadblock up ahead, it dawned on me that maybe barriers aren’t necessarily a bad thing. Barriers are there to separate those who would like something but sit and complain from those who are willing to abandon everything, get up and run towards their goal. Barriers help us distinguish those who would like to achieve success from those who really desperately want and believe they deserve success. So the barriers are not designed to stop you, they are there to keep the other people out.

As he sailed past the business barriers, it occurred to me that barriers are not necessarily a negative thing: they separate those who complain about problems from those who solve them, and help to identify those who are willing to work for their success. Barriers are not there to stop you – they are to keep others out.

10 top tips to make you a networking master