These days, the odds can seem steeply stacked against physical, brick-and-mortar retailers. Online shopping has vastly expanded worldwide over the past couple of decades: Though the explosive rates of growth of eCommerce may have slowed a little, it remains an ever-increasing part of the retail sector.

And that makes sense: With Amazon more than 20 years old at this point and Black Monday just about as hyped as Black Friday. Today’s consumers are accustomed to the convenience, efficiency, and routine of buying just about anything they need—from clothes and gadgets to toilet paper and even groceries—with a click of a button or a swipe of the thumb. So, where does retail-tainment come in? 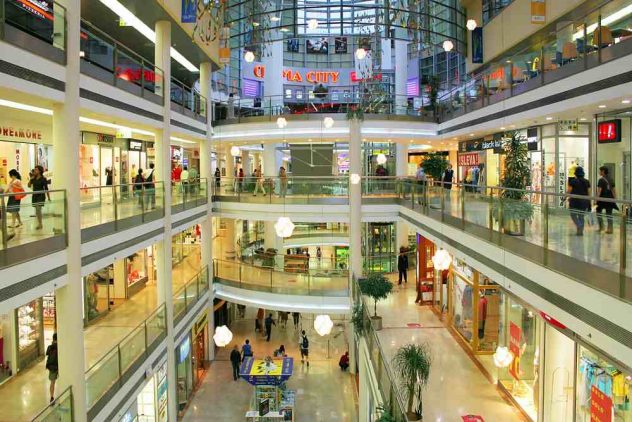 And it’s not only Internet retail that’s threatening traditional shopping malls. Not least because of the lingering effects of the Great Recession, many budget-minded consumers these days favor supercenters, drugstores, and other value merchants over malls.

In an effort to boost footfalls and strengthen their brands in the face of such shifts, many shopping centers are embracing what’s increasingly called “retail-tainment” (or “entertailing,” or “inspirational retailing,” or “shopper-taining”—take your pick). The sociologist George Ritzer introduced the term way back in 1999, describing it as “the use of sound, ambience, emotion, and activity to get customers interested in the merchandise and in the mood to shop.”

Essentially, it’s malls putting the emphasis as much on stimulating and amusing their visitors as connecting them with goods and services. Retail-tainment centers, Nielsen explains, “blur the lines of demarcation between traditional formats, merging restaurants with food markets, serving up food and wine tastings, providing live music and movies, and creating places for friends and co-workers to gather and socialize.”

As Randy White of White Hutchinson Leisure & Learning Group notes, retail-tainment has actually been around awhile in one form or another, but its reach and scale have certainly dramatically increased in recent years. In the early 1990s, a Maryland shopping center, White Flint Mall, responded to declining revenues by revamping itself as a multi-faceted destination, installing a children’s playground, a Borders superstore, and a Dave & Buster’s dining/arcade complex.

Nowadays, such a lineup would be considered downright modest. It’s hard to think of a more lavish example of retail-tainment than the Mall of the Emirates in Dubai: This mall-to-end-all-malls is as well known for the massive Magic Planet entertainment hub and the downright iconic Ski Dubai skiing center as its hundreds of storefronts.

Not your parents’ shopping malls

Not every shopping center can be a Mall of the Emirates, but, from China to Europe to the U.S., many are nonetheless dramatically decked out compared with their forerunners of the 20th century: packed with skateparks, IMAX theaters, mini-golf courses, bowling alleys, aquariums, and the like. Hundreds of in-mall cinemas now come with restaurants and lounges (an attempt to lure viewers who might otherwise just as happily stream their evening entertainment in the comfort of their own home). Shopping centers of the 2010s can be head-spinningly immersive: Consider the lavish outdoors displays of Bass Pro Shops Outdoor World or Cabela’s, say, or the “themed brandstore” experiences of American Girl Places or Disney Stores.

Such setups may draw customers from a much broader area than does a mere old-fashioned hub of shops, which is typically mostly a local draw. They appeal to a person’s love of spectacle, of excitement, of social interaction. And whether it’s via a festival, a concert, or simply a theme night at an eatery, special events can make a shopping center’s brand more dynamic and lifestyle-oriented.

If you’re intrigued by the possibilities of developing or investing in retail-tainment centers in the Port Royal/Naples, FL area, meanwhile, reach out to Janet Berry Real Estate Services.

Continued technological advances are likely to ramp up those immersive and dynamic qualities of hybrid shopping/entertainment destinations. A GeoMarketing article on current retail-tainment trends quotes the FBIC analyst Deborah Weinswig: “Stores of the future will be tech-enabled with mobile apps improving in-store execution, virtual reality headsets that recreate live fashion shows, and even robots that assist in product selection.”

That projection touches on the notion that smartphones needn’t sound the death knell of the brick-and-mortar mall. The assumption that your average tech-savvy shopper is simply browsing store shelves and then buying the products from online retailers—maybe even right there in the store—fails to capture the full picture. Retailers are increasingly using location-based technology to offer on-the-go deals to smartphone-equipped shoppers. And a Smart Insights piece notes that a majority of shoppers actually engage in both online and in-store research before making a purchase.

Such statistics suggest that “offline” retailers aren’t going anywhere—and that retail-tainment, perhaps of increasingly jaw-dropping scale, is probably going to be an increasingly important aspect of their evolution as technological and economic factors continue to influence shoppers’ habits. Writing in a 2014 Blooloop article, Yael Coifman and James Kennard of Leisure Development Partners wrote, “We see further integration of entertainment in retail as inevitable in increasingly competitive markets.”

Retail-tainment may be a clunky neologism, but the trend that it represents may well be the savior of the shopping mall.

Mark Farvell writes about business trends for a selection of business, retail industry and news blogs. He works as a retail trends and predictions analysis and uses his industry knowledge to write his insightful articles.

How can high speed industrial doors be used on your company premises?