A recent report from Goldman Sachs predicts a $100 billion spend on drones over the next 5 years. Darren Sheffield from Cloud Vista Studio gives his summary and thoughts on the report and the business industries it will affect. 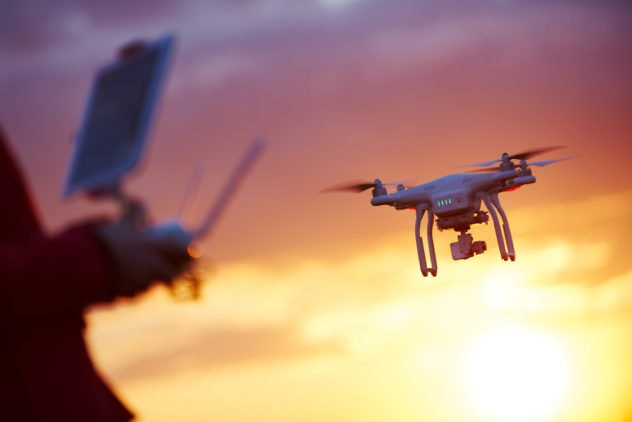 Of the $100 billion spend forecast, $70 billion of that will be from the military sector, with a further $17 billion coming from the consumer market. The segment of interest is the business and government sector with a $13 billion spend predicted on drones.

The main 2 industries are construction and agriculture, with over 80% share of the investment. The biggest at $11 billion is construction, with the main areas being surveying, mapping, inspection and maintenance. The growth here is being led by drones carrying out work that was previously done by other more expensive or less efficient methods. For example using aircraft to do a survey, or a crew of several people to do a bridge inspection are now potentially replaceable by a drone. For this cost saving reason businesses will drive this growth onwards quickly, and it’s why the construction industry will be that much bigger than all the rest in the short term future.

At $6 billion agriculture is the next biggest industry, and the growth here is slightly different from that of construction. In construction we see drones being used to do existing jobs more efficiently. In agriculture the use of drones is tied to the growth and adoption of precision agriculture by farmers. This is essentially the use of data capture to increase returns and manage resources. GPS and mapping have driven this forward, and aerial or satellite imagery has a big role to play. Drones equipped with multi spectral cameras can be used to map and provide several layers of reports that can then be used for crop analysis. This analysis then leads to improved decision making and with variable rate technology the ability to seed or spray differently by area depending on what the data is saying. It’s already increasing yields and saving costs for many farmers, but there isn’t yet widespread adoption.

Alongside construction and agriculture there is predicted to be significant spend from the insurance, journalism, film and estate agent sectors. It’ll be very interesting to watch how businesses develop and integrate drones into their infrastructure, and the opportunities and advancements this brings.

Goldmans Sachs summary of their report:

“The same safety, efficiency and cost benefits that appeal to the military make drones attractive for a wide range of business and civil government functions. The $100 billion market opportunity we forecast over the next five years is just the tip of the iceberg.”

Could taking the human touch out of your harvest reap more profit?

Why Asia is a good market to open a casino in

Technology is transforming the oil and gas industries

The rise of the gambling industry in the UK

How will the GDPR change the events industry?

What you need to know before buying used cars

Dominic Lill - November 10, 2016 0
So, you’ve been looking for a car and you found your dream car. It is used, but the price for it is well worth...
We use cookies. To learn more, read our Privacy Policy.Ok