Discussing and arguing facts is, at the best of times, a formidable task. Figures and values can be biased, while theories and philosophies can be tinged by the prejudices of the minds that they are spawned from.

But nonetheless, generating a conversation around facts is a straightforward matter, everyone brings their data and thesis to the table, and it is systematically hashed out. However, when something as nebulous and inconsistent as ethics is brought up, lines quickly get blurred. 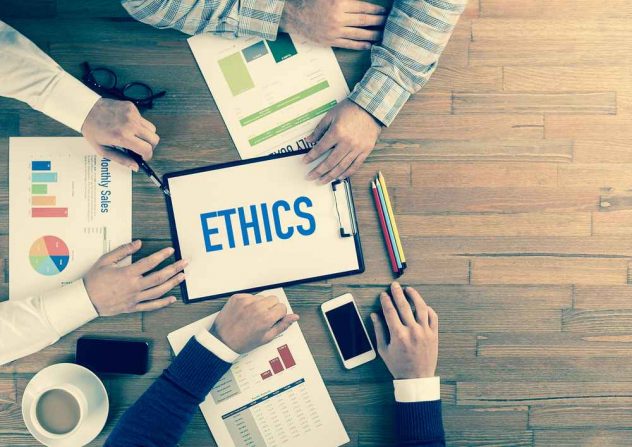 Business ethics is one of those curious things that hold a certain duality. On one side, it is something that everyone holds in high regard (more or less). On the other hand, everyone holds different ethical values. What one person may consider ethical, another may not. Or, what one individual may hold in the highest regard, may be much lower in priority for another.

Ethics is up there with concepts like morals, values and beliefs in that they can at times differ drastically from one person to the next.

The business world is notorious for blurring the lines between what is ethical and what is not. Some say that ethics has no place in business at all, while other claim that holding true to a set of moral principles not only ensures growth for the business, but better standards throughout the industry and business world, in general. In order to discuss the factors surrounding ethical practices it may be worthwhile to quickly touch upon the definition of unethical issues. These practices deliberately impact the business or another business in a negative way. Acts can range from overt acts like bribery, theft and sabotage, to more subtler tactics like market espionage and making bad capital investments.

Boiled down, the application of one’s ethics amount to business decisions in the corporate world. But what exactly goes into those decisions? What factors will sway it from one outcome to the other? To make an ethically sound choice means running the matter through a series of filters. The first of these is to determine whether this business decision is equitable. The next filter deals with the morals of the decision. Is it right? Is it just? The general acceptability of the business factor is the next filter, and is followed by trying to discern the correct decision that will have the greatest positive impact to all those concerned. These factors, look deceptively simple from the outset. Most of them revolve around the ideas of fairness, justice, and doing things for the greater good. But, while these concepts seem easy to understand, they are abstract and can vary greatly depending on a person’s value system.

While different organizations, associations, governing bodies, and even religions have generated their own set of ethics. Unfortunately, there are no universal standards that is consistent throughout the various social and business environments that exist today. Enforcement of such standards is equally difficult unless the breach of ethics also breaks the law, in which case law enforcement agencies can act. In the end, the enforcement of ethical business practices must come from within a business or association of organizations. These self-governing bodies must define and create their own ethical standards which in and of itself, requires the company to delve into its own complex belief system.

A company’s belief system is not to be confused with the religious inclinations of its owners or partners. It does however mean that in order for a company to create ethical standards it must first develop moral standards, for its code of ethics greatly depends on its morals. In turn, these morals are derived from a company’s value system which is mainly culled from the years of experience that a company’s leadership structure brings to the table. This, of course, means that value systems, moral standards and ethics can differ greatly from one organization to the next.

While discussing semantics of ethical business practices is all well in good from a theoretical or philosophical standpoint, there are still real world applications to consider. The so-called “golden rule” must be considered. Several definitions of the rule exist, but it generally states that whosoever controls the gold (money, profits, revenue) dictates the rule. In plain speak, seeking profits is the overriding factor. This is not a universally accepted rule, but a company does have to generate income to remain solvent. But at what cost will the sole pursuit of profits have on a business, its company culture, the industry and the world? Ethics, in many cases, tends to stand in the way of actions that cater to the blind pursuit of money. Therefore, should a company, organization, association or industry decide to create and hold steadfast to a set of ethical standards then they must be willing pay for it, so to speak.

This article is provided by business essay writing service – DoMyEssay.net, which you can contact for getting immediate writing assistance.

How to run your remarketing campaigns the right way

Best management practices every businessperson needs to know about