We chat to Owen Reading one of four co-founders of, adjustable focus glasses company, Eyejusters. Owen talks to us about developing new technologies in the UK and the personal rewards for creating something from nothing but an idea. 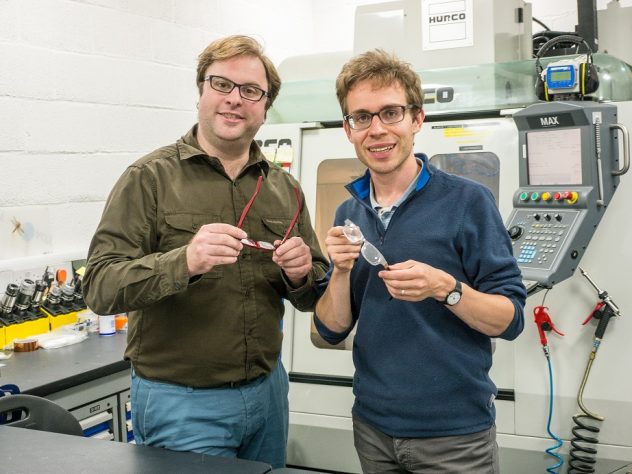 What exactly is your business and how does it help people?

We make adjustable focus glasses – each lens has a small dial hidden behind the frame which lets the user change the lens strength instantly. This means that instead of having lots of different pairs of reading glasses, one for reading distance, one for computer distance and one for close-up hobbies, you can just have one, and focus the lenses like a pair of binoculars. It’s a revolutionary development in eyewear.

How did you come up with the idea for your business?

Hundreds of millions of people in the developing world lack access to a pair of glasses that they need – a simple intervention that would utterly change their lives. The main issue is that they don’t have many opticians near where they live. If they could adjust their lenses to suit their own needs, that would be a great way of getting good vision!

The idea of adjustable focus glasses had been around for a few years when we came across it. One thing struck us – none of the attempts at products up to that point looked like glasses. There was no choice of frames or materials, the look was odd, there were too many compromises. Our approach was to make adjustable focus glasses as much like normal glasses as possible – only then would people take to them.

We now offer glasses in the developed and developing worlds. Our UK range solves a real problem – people who have multiple pairs of reading glasses of different strengths can do away with all of them and just focus the lenses to suit what they’re doing. It’s so simple, yet so effective.

Where did you start your business? How long have you been trying to make it a success?

We started in Oxford in 2010 – there are four co-founders (myself, David Crosby, Richard Taylor and Greg Storey). We developed a prototype product that launched in early 2012 and helped us secure investment, and the product line we’ve been working towards from the start launched in April 2016. It’s been a long, patient process of technology and product development, including setting up a state-of-the-art production line right here in the UK.

Is there anyone you look up to as a business? Who inspires you?

We admire quite a few companies: Dyson and Swatch for their development of technology, manufacturing capability and mass-market success; and Warby Parker, who are shaking up the optical industry with online sales.

My personal business hero is Nicholas Hayek, the Swiss–Lebanese entrepreneur who was co-founder and CEO of the Swatch Group. Hayek believed that the Swiss watch manufacturing industry could remain competitive and created the Swatch watch which used only 51 parts, as opposed to the nearly 100 parts needed to make a traditional wristwatch. They were put together by robots, giving Swiss quality at affordable prices. This is much like our glasses, which are made in a state-of-the-art facility right here in the UK, developed by us. The Swatch technology was coupled to an amazing marketing campaign: people really want to buy these watches. It’s a great marriage of capability to market need.

How did your friends and family react to you starting a business?

To my surprise, my parents told me to go for it! I met my wife after we had started and she’s been incredibly supportive all the way through (“late back from the production line again…”). We’ve received small amounts of seed capital and a few contacts from some of our friends and relatives, so you can’t get much more supportive than that.

What are the biggest challenges you have faced and how did you overcome them?

So many! Lots of aspects of our technology have required us to invent new techniques and processes – we have heard manufacturing professionals tell us that certain things aren’t possible far too many times. In fact, we’ve become quite expert on most of the things we have to do, and we don’t outsource much. I think it’s because we’re all quite technical – we want to learn and improve everything.

Gaining investment for a manufacturing startup in the UK is also difficult There’s not much institutional understanding of manufacturing left, including the capital requirements and risks involved. Other countries have a much deeper integration of manufacturing businesses in their social fabric, which makes it more difficult to get investors to go for you instead of a hot new software startup that just needs a small office and some software developers.

What advice would you give to anyone wanting to start their own business?

It’s hard work, physically and emotionally. No-one else will do the things you need done, so you need to just learn and get on with it. However on the upside it can be incredibly rewarding to stand in the middle of your office/workshop/production line and think that a year ago none of this existed. You’ll learn so much and get to do so many varied things that it certainly beats having a proper job.

Where do you expect to be in a year?

We’re establishing Eyejusters in the UK as a new consumer brand with a revolutionary but incredibly useful product, so in a year’s time you should be seeing us in retailers and in the homes of your friends and family!

I really want us to make a big difference in developing countries – we’re already working with Syrian refugee camps in Lebanon, and have a number of projects ready to go this year.

Tips for a successful startup