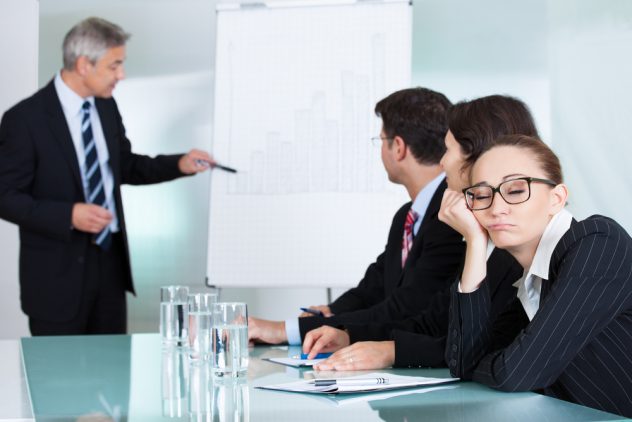 Unfortunately, this isn’t an uncommon problem. Endless unproductive meetings are becoming a blight upon the business landscape, a cycle of wasted time and talent that could be holding businesses and their employees back from realising their potential.

In this article, it states that the average worker goes to 3.7 meetings a week, prepping for one hour and nine minutes for each meeting, and then spending one hour and 22 minutes actually attending it. This adds up to more than a day a week – much of which, we can all probably agree, could be spent more productively elsewhere.

That sounds bad enough on its own, but it gets worse. According to research, meetings that overrun cost the UK economy an eye-watering £582 million a week, taking into account how long meetings overrun and the average salaries of those involved. Interestingly, Harvard Business Review have create their very own calculator to help you work out the cost of your meetings, which might help you save valuable time and money.

But how else can you and your business cut down on the number of meetings you have and the time you spend in them? Here are just a few suggestions…

Granted, the planning of a meeting does contribute towards its overall time/cost, but without proper preparation, it’s unlikely the meeting will stay on track, veering off on tangents left, right and centre. Create any necessary materials and distribute them beforehand – if people can actually read prior to the meeting to then all the better.

For any meetings longer than 15 minutes, make a meeting schedule so that everyone can clearly see what’s to be covered and in what order. And that brings us on to…

A surefire way of ensuring your meetings drag on is by allowing the focus to shift or for other items not on the agenda to become the centre of attention. Having that schedule will help, but you still need to make sure focus doesn’t drift or you’ll more than likely overrun. If any other important topics crop up, make a note of them and revisit them later.

Get your IT sorted in advance

Almost half of UK workers experience delays in meetings due to technology not working as it should – in modern day business, that’s usually a pretty big problem, whether it’s video calling, cloud technology, or the myriad of other technological devices that could go haywire.

Sometimes these things just go wrong, but do what you can in advance by testing everything. This is particularly vital if it’s an important meeting where everything needs to run smoothly.

If you’re confident that you have all those pesky IT issues in hand, then it’s worthwhile making video calling your preferred method of communication when speaking with people outside of the office.

By using video calling, it keeps everyone on task and more alert – this article states that only 4% of people multitask on video calls, compared to 57% on phone calls. This will help ensure that the information discussed in the meeting actually registers, reducing the need for follow up calls or further meetings.

This doesn’t mean invite absolutely everyone into the meeting, obviously, but rather making sure that everyone who is in the meeting has a chance to contribute and have a say. They may not actually want to speak or have anything to add, but it’s important they are given the opportunity. Again, this will reduce the need of follow up emails, calls and meetings. By including everyone, it also means that one person can’t take over and dominate proceedings, something that could derail the meeting.

What time is the meeting?

It may sound daft, but the time you book the meeting for can play a big role in how productive it is. For example, schedule it for just before lunch and most people will be thinking about their stomach. Similarly, arrange it for late on and you’re likely to see people checking their watches wanting to head home.

Meetings are always going to be an inevitability – after all, they’re an important part of running a business – but by employing even just a couple of these tips, you can keep them more focused, saving you precious time and money.

An A-Z every novice bitcoin trader needs to know

Why we all need a career MOT