Olly Hammond tests the DS7 1.6 petrol Ultra Prestige + Opera to see if it stands a chance in the luxury SUV segment and finds out how it handles on the road. 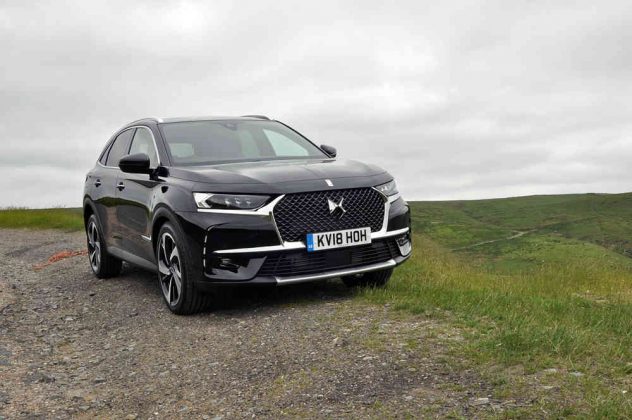 Say ‘bonjour’ to the bulging SUV market’s first luxury model from the land of brioche, Paul Pogba and a penchant for striking that has evidently rubbed off on Northern Rail. Having chickened out of producing a car as aesthetically divisive and perhaps refreshingly radical as the Avantime, Vel Satis, C6 or ironically the now-standalone brand’s own spiritual godfather, DS seems as sensible as it does brave in hoping that the 7 Crossback with its familiar and in many ways Germanic silhouette can trouble the establishment. The déesse is in the detail, though, and DS7 drivers will certainly have plenty of design and technology features to wax lyrical about down the pub, especially if they’re au fait (ahem) with French terms like savoir-faire, guillochage and art de vivre that are peppered throughout DS’ promotional materials. 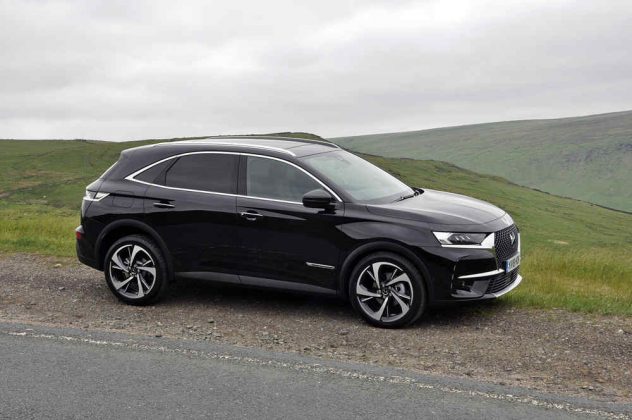 While unashamedly bearing the usual SUV hallmarks from an imposing grille and gaping arches to powerful lines and an upright but elegant rear, the DS7 Crossback’s longish profile and slightly lower stance give it a jacked-up estate feel in the real world, similar to the Kodiaq. Lovers of French cars may lament its undeniably formulaic and Teutonic presence but will be smitten by the abundant exterior details that bestow the DS7 with an avantgarde feel, starting with the diamond-effect grille proudly displaying the DS emblem in the centre and flanked by the brand’s chrome wings. Then there’s the vertical daytime running lights, ribbed bonnet, two-tone wing mirrors, ‘overlapping scales’ effect 3D rear light clusters joined by a chrome bar and, perhaps most notably, the jewel-like Active LED Vision headlights that radiate a purple glow when the car is unlocked before pivoting 180 degrees in a nod to the original DS. Admittedly superfluous, just like the Swedish flag and other exterior detailing discoverable on the latest Volvos, such features nevertheless set models apart in this crowded sector, form conversation-starters and instil a strong sense of wellbeing. 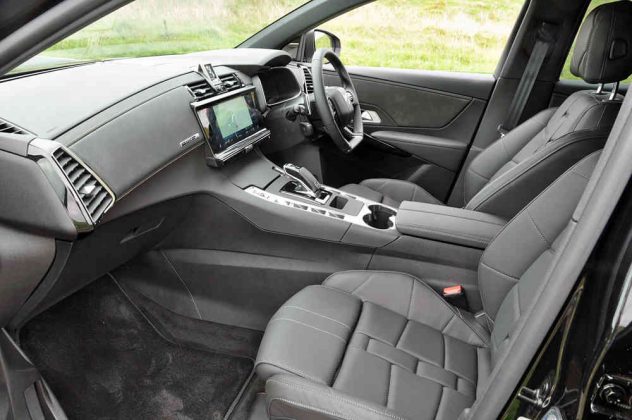 Haute couture, Parisian chic and once again an array of diamond-style elements dominate the DS7 Crossback’s refreshingly different and quirky interior. General equipment packages and exterior styling finishes are grouped into Elegance, Performance Line, Prestige and Ultra Prestige, which is the model under review. DS perhaps slightly confusingly then offers four tailored interior themes that it calls ‘ambience inspirations’ instead of ‘trims’: Bastille, Performance Line, Rivoli and, as tested here, Opera. Think of it like buying a tailored suit, first deciding whether it’ll have a one, two or three-button jacket and a slim or regular fit before choosing the colour and material of the lining along with lapel stitching and other details. Black is the only upholstery colour offered and in Opera’s case translates into Art Black Basalt Nappa leather with a distinct ‘watchstrap’ design not dissimilar to quilting, with the same material finishing the pearl-stitched dashboard and door cards. The novelty of the motorised B.R.M R180 timepiece that rotates into view when the car is started will likely wear off and may ultimately fall prey to mechanical frailty but certainly enhances the DS7’s strong focus on style. 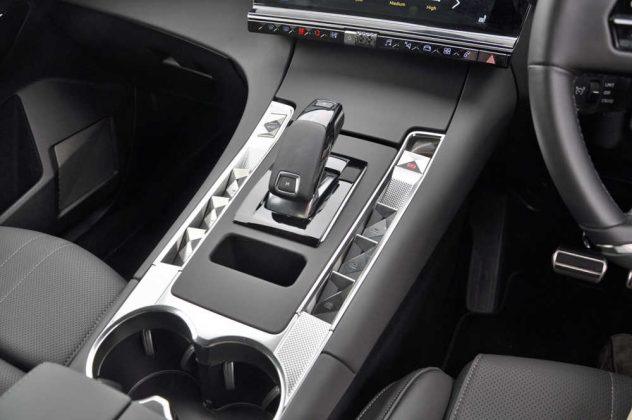 The diamond-inspired electric window switches and various other functions are located in two chrome rows flanking the unsurprisingly quirky-looking gear selector on the centre console, the arrangement reminiscent of the original Porsche Panamera. It doesn’t take long to get used to them along with the DS7’s other unusual functions such as the barrel-like and jewel-textured rotary volume controller and the start button mounted high up on the dashboard just beneath the analogue clock. Cossetted by soft leather and pampered by the heated and cooled seats with different massage settings including ‘cat paw’ while seated at a modestly elevated height similar to a Kodiaq rather than perched above surrounding vehicles, the DS7 Crossback Opera once again majors at wellbeing, aside from the finger-stabs required to operate the otherwise beautiful-looking but fiddly 12.3-inch HD infotainment touchscreen that never looks as crisp as those of premium rivals and is prone to lag at times. From wireless smartphone charging, a 12-inch digital instrument cluster and highly customisable ambient lighting that once again has a diamond vibe, to a pretty impressive sound system called FOCAL Electra plus options including ConnectedCam and even infrared night vision, the DS7 Crossback in Ultra Prestige + Opera has it all, even if the ultimately chintzy touches may not appeal to everyone. 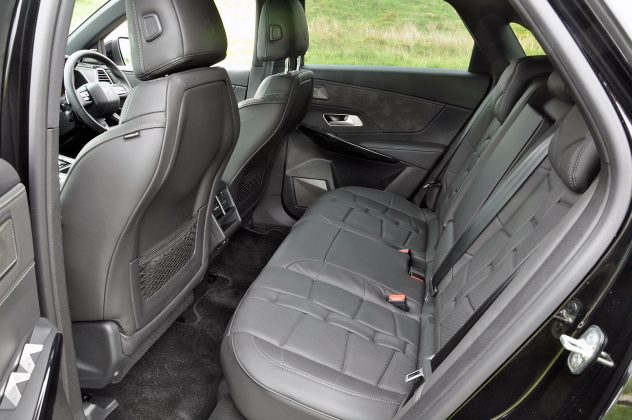 French cars have long excelled at storage and practicality and the DS7 boasts an impressively large split-opening cubby between the two front chairs, plus decent door bins for stowing bottles and other gubbins on the go, although the glovebox is quite pokey as it houses the fusebox. Head, shoulder and legroom in the back are good but not cavernous and while there’s no transmission tunnel hump for the middle passenger to straddle and the seats recline electrically, their angle results in a squatted feeling. Boot capacity of 555 litres trounces many of the car’s technical premium C-segment SUV rivals like the GLA, Q3, X1 and XC40 and even matches similarly-proportioned models from the echelon above like the GLC, Q5, X3 and XC60. The DS7 acquitted itself well when emptying a lockup containing over a hundred box files, large containers and other paraphernalia during its week under review, but parents who came to have a nosey seemed to immediately dismiss its boot as too small and not suitably shaped for two pushchairs, and it’s a shame that the adjustable boot floor is a cost option even for Opera. Flip the seats completely flat and a whopping 1,752 litres is opened up, again beating most actual and perceived alternatives – although despite its name the DS7 can’t be specified as a 7-seater. 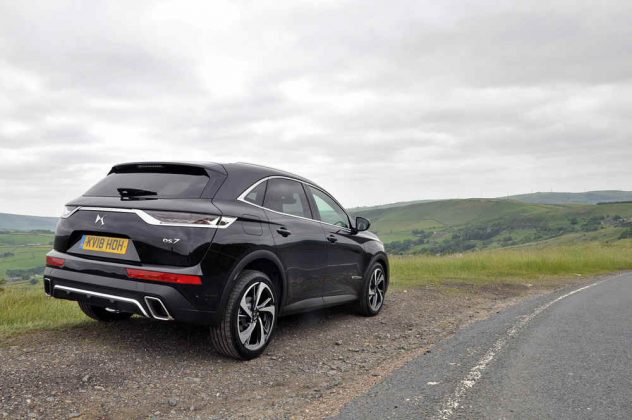 On the road, any worries over such a relatively large vehicle struggling with what sounds like a small engine under the bonnet are calmed by the turbocharged 1.6-litre PureTech (PT) petrol engine. We live in a day and age of ‘downsizing’ with many alternative models on the market coming with 1.4-litre and even 1.0-litre engines in some cases. Peugeot’s 1.6-litre unit can be specified with either 180bhp or 225bhp as tested, which provides peak torque of 300Nm. The engine largely sounds and feels like a quiet, friendly kind of motor, just a touch of coarseness evident when it’s given the beans, which feels contrary to the DS7’s relaxed, wafting nature anyway. There’s nothing particularly memorable about the engine but neither is it unforgettably poor, generally proving a pleasure to drive in town and on country roads and motorways alike, working well with the EAT8 automatic transmission that shifts up and down seamlessly on the whole, with gear changes only very subtly felt on occasion. The less powerful 180bhp version of the same petrol engine has identical fuel economy figures with just a 4mph slower top speed, which is academic anyway.

Company car fleet managers will be more interested than personal leasers in the engine’s meeting Euro 6.2/Euro 6d-TEMP specifications and emitting 135g/km CO2, while everyone will be quite impressed by knowing that it averaged 40.8mpg after 370ish miles of mixed-road driving much of which had either four adult passengers or boxes piled to the roofline on board, which is a pretty good distance range to rely on.

The currently front-wheel-drive-only DS7 is typically French in its setup that excels more at cossetting and refinement than athletic agility, the car’s steering feeling light and fairly lacking in feel, but at least it makes it a doddle to manoeuvre in tight spaces. Optional ‘DS Sensorial Drive’, which wasn’t fitted to the test car, adds an advanced system called Active Scan Suspension aimed at making the car flow like a stream of smooth chocolate over Blighty’s abysmal roads, but the standard suspension setup as tested seems perfectly adequate.

Its price tag at £43,740 as tested theoretically means that the DS7 Crossback financially straddles the prices of larger 7-seat SUVs from middling brands and similarly-sized premium models from the Germans, Swedes and Brits, which may feel like a wince-worthy investment too far for many. Car leasing prices position the DS7 1.6 225 Ultra Prestige + Opera in similar territory to a fully-specified X1 or a basic-spec’ Q5. DS’ confident individuality, especially when it comes to the interior, has got to be saluted, though.

How to use employee feedback for improving your business