Have you been asked to be a guarantor for a loan? Here’s all the information you need to know about loans with a guarantor. 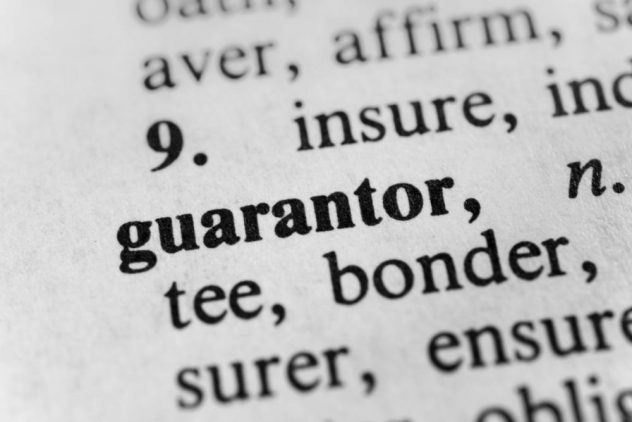 What is a guarantor?

Signing on the dotted line can be a stressful ordeal in any situation. Whether it be for the lease of a house, a mortgage or the lease of an item, a guarantor is often needed as a safety net for the lender, should the borrower be unable to repay a loan amount or any existing debts. This can take the form of a parent, a friend, a close relative or a partner (so long as you are not married to them). They must also exceed the age of 21 and also (in most cases) be a UK homeowner. This essentially means that should the situation arise where the buyer cannot afford the payment, the landlord can ultimately take legal action to recover money from the guarantor.

This certainly has its benefits for borrowers. It means that those with a poor credit history (particularly young people) will not be hindered by this as guarantors tend to hold a much more personal relationship with the borrower. Although this has its pitfalls as there is no interest cap on guarantor loan repayments. What this means is that the guarantor will (likely) assess the financial stability of the borrower and as a result, their ability to make payments so they can calculate the likelihood that they will assume responsibility for paying the remainder of the loan amount. Though be warned future guarantors, I cannot stress this enough so that you are not left vulnerable by a borrower or take any situation that you are presented with lightly.

At the start of 2017 a study by Citizens Advice showed that problems with guarantor loans had risen up to 40%, with a large number of cases being reported where guarantors were ordered to make payments despite being unemployed and consequently, unable to pay the subsequent the debt off. While this may seem like an easy hole to avoid, it is important of the some of the types of loans surrounding guarantors. Therefore, it’s essential to grasp what type of loans will affect guarantors.

What types of loans require guarantors?

Firstly, it is important that guarantors understand what type of loan they are being made party to. This comes largely in the form of two categories, unsecure and secure loans. The former is where a lender will provide you with money, yet they will also require collateral to back it up in small amounts. Whereas the latter means that money that you borrow is secured against an asset of your own i.e. a possession or property. Therefore, guarantors should be looking towards secure loans as a means of ensuring that. Personal loans also come under the bracket of unsecured loans. These are essentially loans that a lender makes that are not secured against any particular asset.

The phrase ‘unsecure loan’ might not sound the most attractive prospect to anyone at face value, and the effect that it can have on guarantors can be a difficult one to pinpoint. This is mainly because the uncapped interest rates on guarantor loans mean that borrowers can end up paying far in excess of the sum that they originally borrowed. While this may be quite an awkward scenario given how it common for the relationship between a guarantor and a borrower to be quite personal it does at least provide the former with a layer of protection should the latter spend a large period of time to pay back any borrowed money.

With regards to secured loans, these can have a negative knock-on effect for guarantors if there is a default on the payments as it may mean that there is a risk of the guarantor’s property being repossessed.

6 top tips for becoming a guarantor

1) Trust the borrower: It’s vital to trust that the borrower will make their repayments because if they default on these then it will be your job as the guarantor to pay out.

3) Understand your own financial ability: Although the lure of putting a high-interest rate on potential guarantor loans may seem attractive, be careful to avoid any scenarios like that previously mentioned study (above) by Citizens Advice showed. Make sure that you have the means to be a guarantor so that you can cover the borrower’s debts without putting yourself under extreme pressure.

4) Understand what you are signing up to: The terms of the guarantee may be written down in a separate agreement, so it is vital to ascertain what these agreements. It’s also important to note that there may be a possibility that you are guaranteeing more than just the unpaid rent of the lender and that this may extend to other debts.

5) Don’t take risks: If there’s anything within the agreement don’t take any risks and get someone else to read over the document. This will be helpful for those who are stepping into their first roles as guarantors or those who are unfamiliar with responsibilities such as this. It may also be wise to call upon any independent legal advice to ensure that there are no loopholes in the contract that you sign.

6) Understand when your responsibility starts and finishes: This will largely depend on the wording of the guarantee. This may depend on whether the borrower is co-habiting a property with other people and if they have guarantors themselves. Ultimately this means that if you are the first person out of all the guarantors to sign then you will be liable from when you have signed the agreement. These responsibilities will normally last for however long the tenancy is so make sure you’re aware of how long the contract of the borrower last for.

How to succeed in small business

Make the most of lockdown: Check your financial history to see if you’ve been mis-sold

4 ways to save money for your small business

How a bad credit loan can affect you

The ultimate guide to financing your startup dreams

Dominic Lill - August 1, 2018 0
If you’ve recently waved goodbye to your full time job, excellent promotion prospects, the camaraderie and banter of your office colleagues and a steady...
We use cookies. To learn more, read our Privacy Policy.Ok