Moving to Australia has long been popular amongst recent UK graduates. Why? Because who wants to swap student loan worries and the high likelihood of living with their parents for some southern hemisphere fun and sun down under. 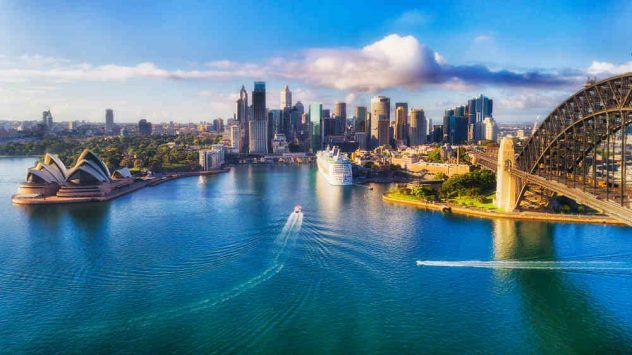 However it’s not just twenty-somethings that up sticks and head for the sunnier climes of Aus. The country which shares our common tongue is actually the most popular destination for emigrating Brits of all ages. In fact, 1 in 4 British expats live in Australia, according to The Guardian.

Why move to Australia?

Aside from the obvious—the language barrier is (mostly) non-existent and the weather is heaps better. For those reasons alone, Aus is a popular destination for us Brits.

Now, the cost of living is on a par with the UK—but it’s worth noting that Australia has one of the world’s highest minimum wages.

On top of this, Melbourne is apparently the most liveable city in the world.

Plus they love their cricket just as much as we do. (Perhaps even more, but don’t tell that to the Barmy Army.)

Ignoring the whole giant spider issue then, it’s hard to find much fault with Australia for Brits looking to go abroad.

Melbourne: An artsy city, with good food, good art and good music. Melbourne also has an infamously fast-changing climate that will make Brits feel right at home. And it’s coffee obsession makes it one for the caffeine fiends.

Perth: Laidback but swelteringly hot, is how most people describe this western Australian city. Nevertheless, Perth is actually the most popular Australian destination for British expats. Great for the outdoorsy types, including those who want a more suburban lifestyle, Perth is also ideal for families.

Sydney: Typically summed up as ‘cosmopolitan’. If you’re a beach bum but love to dance ‘til dawn then LGBT-friendly Sydney might be the city for you. It’s also Australia’s biggest city. So you’re sure to find social groups, clubs and classes to suit your tastes.

Adelaide: Way cheaper than Sydney and Melbourne when it comes to housing, Adelaide is an underrated but attractive city which more expats might want to consider. It’s also the kind of city that doesn’t feel quite like a city. Plus, it’s surrounded by great wineries.

While no expat advice article can replace the word of a lawyer well-versed in immigration law, here are some of the things to consider visa-wise if you want to move to Australia.

For other Australian visa options for British citizens, check the Australian Government website.

If you’re already sold on the idea of moving Down Under, take into consideration these cultural caveats before buying your plane ticket.

Australia is known for having a strong currency—great for those who earn their money in AUS$ but pretty shabby, at least initially, for Brits looking to move out there.

Well, your hard earned pounds might be worth a little (or a lot) less as soon as you touch terra firma in Aus.

Therefore, one of the best pieces of advice for potential expats in Australia is take as much with you as possible. That way, not only will you have some home comforts to ease the transition (the language might be the same, but the lifestyle is pretty different!), you’ll also be able to save time, money and energy on simply re-buying everything when you arrive.

Of course, feel free to throw away your cheap pots and pans, but keep those cast iron gems and compare international removals offers over at buzzmove to find the right movers for you. They’ll take care of the (literal) heavy lifting, so you don’t have to.

After all, you’re flying halfway round the world for the relocation of a lifetime, so don’t half ass it!

When it comes to healthcare, you’re in safe and (mostly) subsidised hands. Much like the UK, Australia has a national health service that’s funded by a combination of the taxpayer and the government, although optician and dentist visits must be covered using private insurance policies or paid for out of pocket. For more information on Australian healthcare, click here.

In a similar vein, you might as well cut your losses and quit smoking before you get to Australia because the cost of cigarettes is, well, prohibitive to say the least.

Finally, make sure you’re sure about your move, because flying home from Australia ain’t exactly easy (or cheap)!

5 ways to spring clean your SME

How to develop a cohesive work environment