Its talents running deeper than its obvious exterior theatrics and cutting-edge interior, the new Audi A7 50 TDI is a remarkable business express and is set to become even better in time, as Olly Hammond explains in his in-depth road-test review. 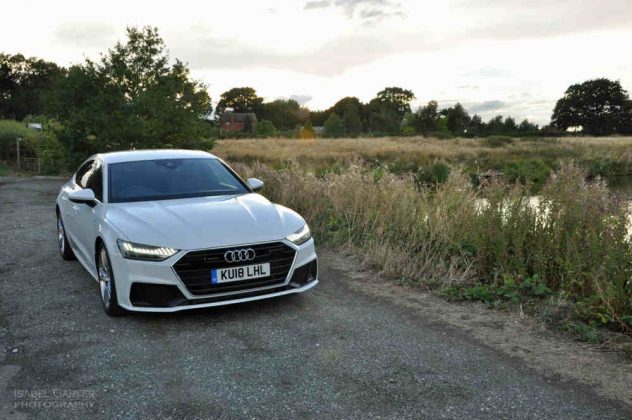 Marrying someone primarily because they’ve got captivating eyes would probably turn out to be a decision that would come back and sink its gnashers into one’s gluteus maximus. Similarly, it’d be a trifle shallow to plump for Audi’s new A7 Sportback four-door coupé largely on the basis of its rather fancy animated rear lightbar that sees no fewer than 292 LEDs dance around when the car’s locked and unlocked, echoed by an equally flamboyant display at the front. There’s no denying that this particular highlight from the new A7’s technical arsenal is stunning, though, until the novelty perhaps wears off.

A luxury five-seater executive car first and foremost, the second generation A7 retains its penchant for haute couture suits, and although the almost entirely new exterior appears more like an evolution in reality, the silhouette is as sexy as ever and Audi’s new signature grille licks tarmac like never before. Aside from the retractable rear spoiler and the tested S line trim’s lightly accentuated body styling and dustbin lid-sized 20” rims that sit perilously close to the arches, the new A7’s overall design is pretty restrained, though. The front wing has a whiff of America about it when viewed in profile from a first floor window and nit-pickers may lament the C-pillar rear window line failing to seamlessly join that of the door below, but Audi has otherwise done a sterling job of introducing its latest premium model design language to the A7. 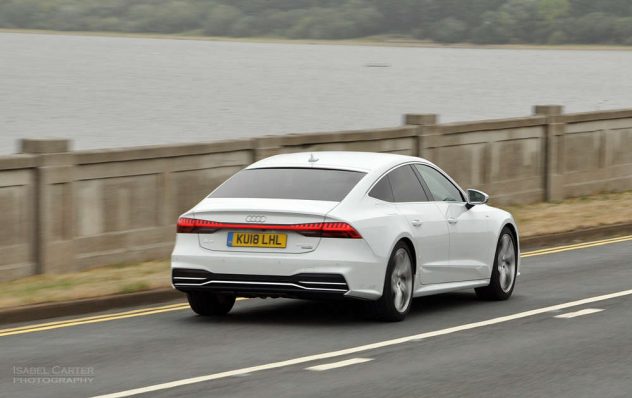 Thanks to the car’s sheer length and wheelbase, the cabin belies its sloping roofline and offers plenty of space front and rear for most folk except NBA players, although the middle seat is best suited to a young child or for short journeys because the transmission tunnel gobbles up legroom. Black and grey are the only palette choices currently available for S line trim’s wonderfully comfortable Valcona leather sports seats with S embossing and rock grey contrast stitching, whereas sport trim’s seats also come in brown, light grey or beige, reducing the relative sombreness of Audi’s cabins, the A7 no exception. Still, they’re probably the finest in the executive car sector with tremendous perceived build quality on the whole, front and rear, the test car’s only niggles manifesting in the form of a centre console rattle and a piece of errant trim poking its head out near the passenger footwell.

Some may find the multi-layered dashboard fascia somewhat bulbous but they look smart in glossy piano black complemented by brushed matt aluminium and highlight Audi’s bold new design language, having taken a leaf out of Tesla and Volvo’s books by taking a minimalist approach. The primary 10.1” full HD touchscreen in the centre of the dashboard is joined by an 8.6” touchscreen (again full HD) that sits just below and operates climate control and other comfort and general settings, plus acts as a tablet for scribbling sat nav addresses and other stuff onto left-handedly as part of Audi’s clever MMI Touch system. The new Audi A7 proudly incorporates haptic feedback as a nice embellishment, providing users with a click feeling and sound when the screens are pressed, but adjusting climate and other settings on the move still proves frustrating at times, just like in the aforementioned rivals’ cars.

The Bang & Olufsen Premium Sound System is well worth the £800 hike, Audi’s latest MMI navigation plus and Virtual Cockpit systems look gloriously classy, as does the LED interior lighting suite, while the gear selector is as contemporary as ever. Audi’s Phone Box system that pairs Bluetooth automatically and charges compatible phones wirelessly is devilishly clever, too. With 535 litres as standard, expanding to 1,390 with the back seats lowered, the second generation A7 is a relatively practical car and comes with a decently-sized glovebox, door bins and other storage cubbies. 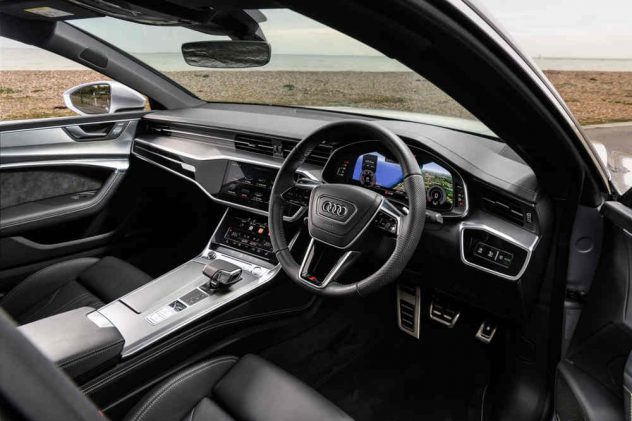 Gripes are few and far between, the resolution of the rear-view reversing camera not seeming particularly crisp, the footrest feeling too far away for average drivers, and the cupholder compartment lid annoyingly jutting up and contradicting the cabin’s driver focus. Barrel-scraping aside, the new A7’s interior is a beautiful place in which to wile away the miles.

When it comes to driving, the muted thrum from the meaty V6 diesel engine is typical of an executive ‘Q car’ like this and with 286bhp and 620Nm/457lb ft torque available, fed to the road by permanent but rear-biased Quattro in an attempt at extra sportiness, the 3-litre A7 50 TDI is capable of even leaving plenty of feisty petrol cars in its wake, hurling itself to 62mph in 5.7 seconds and with a 155mph top speed. Granted, the powerplant does sound a trifle coarse on full throttle and despite the A7 50 TDI’s ability to overtake half a dozen cars with one cockroach-squishing stomp of the accelerator, it’s essentially a business express for wafting about in. Still, some fun can be had when snaking along A-roads or powering onto and off of roundabouts and away from traffic lights cheekily, all the time underpinned by the surefootedness of quattro all-wheel drive and a self-locking centre diff’.

Rather than the twin-clutch 7-speed fitted to its 55 TFSI petrol sibling, the A7 50 TDI gets Audi’s 8-speed tiptronic gearbox, which occasionally trips over itself with a few jerks and shunts in slow-moving traffic queues and other situations involving ambiguous throttle input, but behaves smoothly most of the time and is excellent on faster roads. 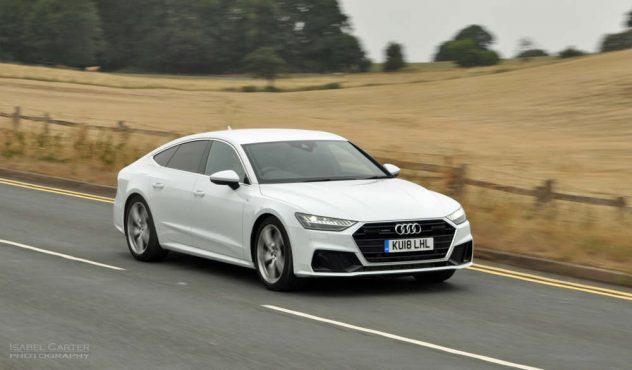 In a bid to restore drivers’ confidence in fuel economy figures, with September 2018 marking when the new and more realistic WLTP test for CO2 and MPG comes into force for all new cars, Audi has fitted the A7 50 TDI with a mild hybrid setup involving a 48v electrical system, lithium-ion battery and fancy alternator. The car’s front camera and Google-connected sat nav allow it to read road, traffic and weather conditions along with knowing when a corner or gradient is coming up, for example, able as a result to predictively activate the start-stop function while moving, effectively cutting the engine out and letting the car coast with regenerated electrical power at various times. It all happens unobtrusively, but drivers may take a while to get used to the accelerator pedal vibrating whenever the car reckons coasting would prove prudent in efficiency and environmental terms. Audi’s by no means the first to adopt mild hybrid, Suzuki having equipped various models with it a while ago and many other marques following suit, but it is clever technology that will become widespread and, in the A7 50 TDI’s case, improves its prospects nicely in front of fleet managers, company lease car drivers and personal contract hire (PCH) motorists. After covering around 450 miles during the week-long road-test, it had averaged 46.3mpg, impressively close to the published WLTP figure of 48.7mpg.

The car’s as-tested price tag of £65,000 won’t come as a surprise to and cause anyone in the market for a luxury four-door coupé like this to choke on their morning toast, and leasing payments work out at around £600 per month after paying a 9-month ‘initial rental’ deposit.

With Audi’s ‘drive select’ system set to either comfort or efficiency mode, the new A7’s firm ride results in a jarring experience over manhole covers and poor road surfaces, but the suspension copes brilliantly with even the tallest of speed-bumps, along with undulating country roads. Dynamic mode tightens everything up more aggressively, but the rivals from Munich with the blue and white roundel still rule when it comes to handling, the Audi ultimately and typically lacking in steering communication and feedback.

A pair of black boxes are very noticeable on the front grille, the A7 coming bunged full of clever stuff including Car-to-X and other swarm technology that can talk to traffic lights and other Audi fleet vehicles, five radars of varying ranges, cameras all around the car, a LiDAR laser scanner, loads of other sensors and a central processing brain called zFAS. Like its A8 sibling, the second generation A7 will eventually allow remote-control parking using a phone app and is capable of Level 3 autonomy, but the laws in the UK and other countries currently prevent driverless features to be used, so Audi will have to make do with gradually activating functionality over the coming months and years, like Tesla has been doing. 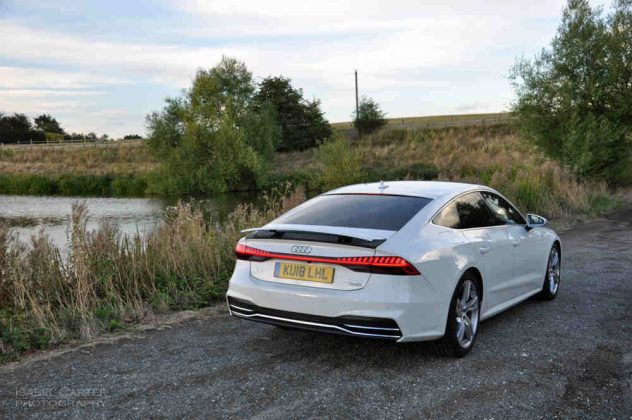 For the time being, the 39 different driver assistance systems fitted to the new A7 either as standard or as part of the £1,950 Tour Pack added to the test mule are manifest in the form of Pre-sense Basic front collision anticipation, seatbelt-tightening when you set off, Lane Departure Warning with emergency assist, and various other sensors and assistance aids that are imperceptible until a bong and a visual warning are given. Similar stuff is available for cars as humble as a Ford Focus, though, and although the Audi A7’s adaptive cruise control system works really well and is capable of taking over the steering, UK law again currently prohibits its use, potentially causing some businesses and individuals to delay ordering one until such tech’ can be used in the wild.

Built to an extremely high perceived quality, the new Audi A7 is almost too precise in many ways, ultimately lacking character outside and in, like marrying someone without a single pimple or hair out of place but with no lovable foibles either. Still, it’s unarguably beautiful, its styling evolved successfully to grace it with even deeper elegance along with contemporary touches like the desperately cool albeit admittedly pointless animated lights that give it strong kerb appeal.

The A7’s typically Germanic cabin is mostly constructed exquisitely and is brimming with technology from the superfluous but sleek to the downright useful, with an indisputably special feel overall. Although accountants, fleet managers and company car drivers may gravitate towards the less potent 40 TDI unit for tax and other financial reasons, the A7 50 TDI’s huggable bear of a V6 diesel engine is immensely likeable. And although the ride’s on the firm side and the handling isn’t electrifying even if the powertrain at the car’s heart literally is, this variant is a cracking all-rounder, which is set to become even more appealing once its dormant autonomous features are gradually switched on.

Should you get a personalised plate for your business?

Sign making is still a crucial part of marketing strategies