While everyone is focused on the future of search, what about its present? 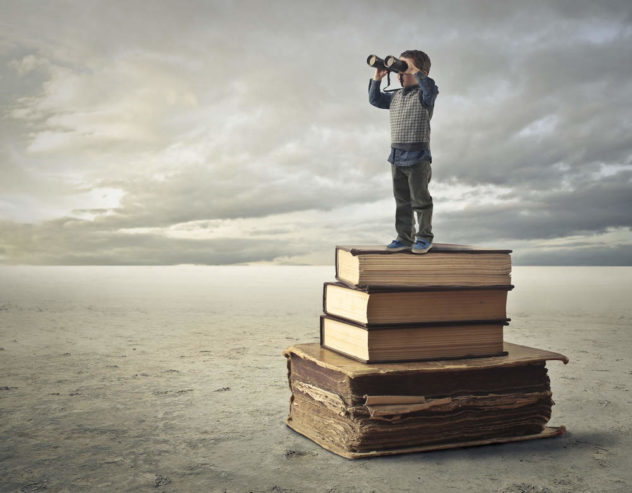 As Google rings in its 20-year anniversary (read: effective reign over the Internet), and promises to “improve search for the next 20 years,” the moment is ripe for disruption. And while the fruits of that disruption may still be another 20 years away, the seeds are being sown right now for the future of search.

“We’ve reached an era of a less-connected web, a web focused on retaining users rather than sharing content” — Rand Fishkin, SparkToro

From Reddit to Google, Instagram to LinkedIn, through to YouTube and even the previously open-format, conversation-centric Twitter, social media platforms are taking a page out of Facebook’s book and gearing their platform towards profitability, using subtle tactics to retain their user base.

One of the most obvious and significant of these tactics is related to outlinking — which is, of course, one of the major aspects of SEO or search engine optimization.

Using these social platforms to create content, link “out”, and generate traffic that leads users towards the individual, brand or business’s main website has been an best practice for years. Everything from guest blogging to sponsored content creation has been informed by this process.

But search engines are now fighting back by altering the way in which search results are ranked, as well as the ways in which they are displayed and showcased. 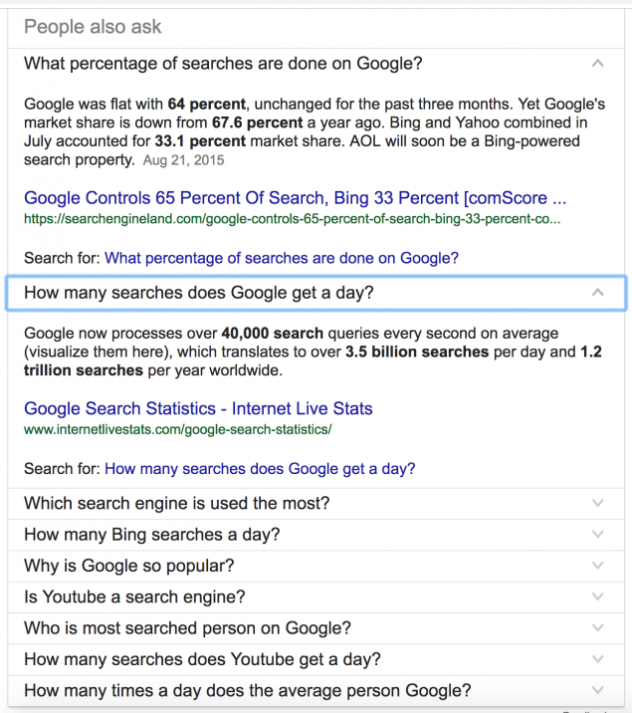 The big question then becomes: “How do we respond?”

Obviously, different swaths of the population will respond in different ways, as we each have our own priorities and aims when using the Internet.

It’s clear that marketers will have their work cut as they try to either use these platforms to build “native” content, or as referral sources to direct traffic back to their own hosted websites. The case may be that marketers simply accept the ranking hit has part of the “brave new world” we’re in.

And what about users? Google’s explicit changes risk putting us in an echo chamber, reducing our exposure to different viewpoints and perspectives. So, is there an alternative? Not really — because even as the presence of other search engines continues to grow, Google has set a precedent, a template for aggressive growth that all search engine worth their salt are trying to emulate. To put it simply, the Google way is profitable, and ‘profitable’ is everything.

So while the market share for Google has dropped since January 2010, even that has only been a 4% decrease.

Though engines like Baidu and Bing have crept up, is this really a cause for celebration?

One of the main issues with search today is that it’s run by major monopolies. A monopoly, by its very nature, is an economic behavioral concept. This, by extension, brings in the idea of incentive — and all of a sudden, here we are, thinking about previously decentralized and democratic, network-based concept like search in purely business terms.

How do we return “search” in the next 20 years back to its grassroots of shareability, connectivity and a levelled playing field of easily accessible information?

One answer lies in blockchain technology and search. See, the Google supremacy is a less-than-ideal situation, and not purely because of the concept of profit incentives themselves, but because of the ways in which these incentives are manifested.

These incentives are tied in to a lack of privacy, a lack of user control over their own personal information and an aggressive, targeted form of advertising that uses people’s indexed searches to extrapolate metrics regarding behavior, preferences, demographics, and more.

And what’s the point of all of this? So that organizations have more prospects to market to.

While engines like DuckDuckGo addresses the privacy issue head on, this valid underdog and alternative to Google is still based on a centralized model of search indexing.

The idea behind using the blockchain to power search engines is to return search to its original, nature and purpose. This is known as “distributed search” and relies, as blockchain does, on decentralized sharing via peer-to-peer networks.

For some idea of how this might work and evolve, we can look at distributed search engines like YaCy and Presearch.

While YaCy relies on a network of computers with their own index and ranking, Presearch harnesses a “token” ecosystem in which tokens are purchased during a crowdsale. Tokens are issued to early adopters to reward usage, token holders are then the ones to be able to vote on decisions relating to the platform, and advertisers will be able to purchase targeted KW sponsorships using these tokens.

Another example is BitClave, yet another distributed blockchain-based “active search ecosystem” (BASE) that incentivizes participants with tokens (better known as “Consumer Activity Tokens” or “CAT).

“BitClave’s technology is capable of anonymizing a user’s digital profile via the anonymous activity ledger…If a user has not chosen to share data in exchange for Consumer Activity Tokens, the user’s data will not be shared with businesses. What this amounts to is total and complete agency over data for users and a renaissance of privacy that has not been seen in any search engine currently on the market. And of course, all of this would not be possible without the deployment of blockchain and smart contract technology.” — BitClave

The clincher, however, is this: Never one to keep it’s fingers off the pulse, Google has been keeping one surreptitious eye on blockchain as well. The digital “gatekeeper” to information is actually a major investor in blockchain technology, responsible for 140 investments equaling around $1.2 billion.

To preview another potential avenue for the ongoing development of search, we can take a look at the example of WeChat.

In this case, it’s the highly authoritarian political system that subdues searches and completely forces consumers and individuals to adopt WeChat — or risk being totally cut off from the rest of the world, as well as the most basic of functions. 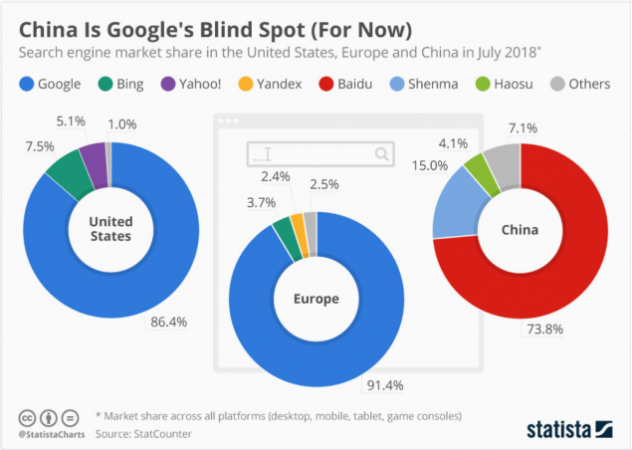 You’ll recall from the previous graph that while Baidu still only represents 1.08% of the world’s search engine market share, in China, it’s all that counts.

But you’ll see that, alongside Baidu, WeChat has been quietly and consistently taking over all of China’s communications, creating its own universe of highly-functional uses like being able “play games, pay bills, find local hangouts, book doctor appointments, file police reports, hail taxis, hold video conferences, and access bank services”.

As long as you’re within the app.

While countries where users can (and do) access Google are not necessarily entirely authoritarian, one has to wonder if the future of search, given Google’s intended direction, could very well see the search engine planning to rise to the status of “all in one service provider”.

In fact, it’s already battling Amazon for monopoly over e-commerce through its own “Shopping” function, designed to be an e-commerce marketplace masquerading as search results.

No doubt, the “Shopping” tab has been in the works for a while. Its slow rollout has nothing to do with development and everything to do with perception: Google is more indirect and surreptitious with its moves and plans for complete web dominance and it’s dipping its proverbial toes in, one patent at a time.

Meanwhile WeChat does not kow-tow — mostly because it doesn’t need to. It has the full strength of the Chinese government behind it.

It may be, as Matthew Hodgson writes in TechCrunch, a case of using digital technology to move these plans for dominance ahead. If Google and Amazon can use these patents to digital access and store your voice recordings, why wouldn’t their next move be to integrate multiple functions within one app?

“[N]ow we have Skype from Microsoft, Facetime from Apple, and Google with Duo. Each big company has its own equivalent service, each stuck in its own bubble.”

And what about websites?

While on the subject of the future of search, one can’t help but try and figure out what this means for the future of SEO and, to return to the original point about outlinking, the future of websites.

Usually, any conversation on websites is related to mobile browsing. Somehow, websites get subsumed with the statistic that 71% of all decisions, behaviors and searches are now occurring on mobile. It’s a battle between mobile versus desktop, apparently, and mobile would seem to be winning.

To mitigate that, some web designers and developers are moving to adaptive design rather than the now traditionally-accepted standard of responsive design. They hope to be able to tailor the design of a website to the user’s expectations, and it’s still unclear what effect this has on search rankings (since multiple versions of the same website might count as “duplicate content” in the eyes of Google – and Google does not like duplicate content).

But the bigger question is this: If, as we saw previously, Google is simply offering snippets of answers from a website right on their user interface, users won’t even need to hit the link to the website.

This means that while the website does appear in the search result, users might have no incentive to explore further.

It’s an odd paradox of a situation: Apparent access to upfront information by Google, using this framing technique, actually makes for less of an incentive to search further.

So here’s a useful question to search for: If social media platforms and search engines are trying to keep users on their own interface… will websites even have a place in the future of search at all?

Emma Knightly is a digital marketing specialist at the Digital Marketing Institute. The DMI offers marketing education and certification to over 20,000 marketing professionals worldwide and assists businesses in educating staff to achieve smooth digital transformation. Enrolling now at https://digitalmarketinginstitute.com/en-gb.

5 ways to use effective infographics in your marketing strategy