Copper has been used for cables to transmit power and data for a very long time. This is because, historically, it is one of the lowest loss transmission mediums and is able to transmit over long distances reliably. More recently, however, copper has seen its predominance as a data conduit challenged in the shape of a new technology, fibre optics, which offers greater speed and even lower loss rates. 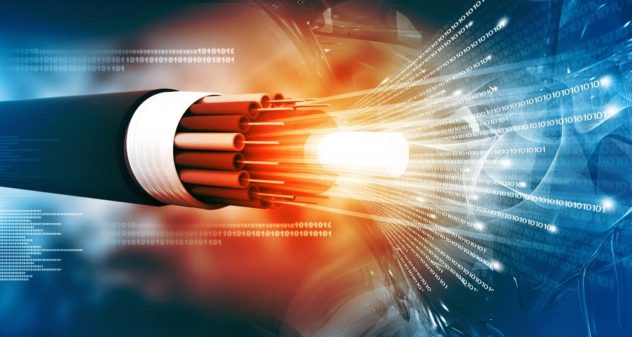 However, copper is still popular as a network cabling medium, so which is the right choice when you are considering a new installation or looking to expand an existing network?

Let’s first take a look at how data is transmitted. In copper or other metal cables, data is carried as a series of electrons which flow through the metal rather like water down a pipe. Equipment at either end converts the data to the correct format and back again.

Fibre transmits data as pulses of light down a glass tube, rather like Morse code, but the outside of the fibre has a reflective coating allowing the signal to bounce off so the cable can turn corners. Again equipment at either end converts the data or voice information into light and back again.

Although wireless networks have become more common in recent years, most business networks still rely on some form of physical cabling to operate. In the past, this has been twisted pair copper which, in its cat6 spec, can offer transmission speeds of up to 1 Gbps on distances up to 100 metres. It’s reliable and it’s also relatively cheap and easy to install. When you are dealing with longer distances, however, copper has a problem with signal loss which can result in lower transmission speeds. This means on bigger sites, signal boosters may be needed to maintain acceptable performance.

Fibre optic cable is different as it transmits information in the form of light through a glass filament. This means that it’s able to transmit data a lot faster, at speeds of up to 10 Gbps or more. It can also operate over much longer distances – up to 2,000 metres – before signal loss becomes a major issue.

Fibre is more expensive currently, although its cost has come down in recent years. It also needs careful installation as it can’t turn sharp corners. Of course, you don’t have to have networks completely built using fibre. It’s possible to use fibre to provide the network backbones – particularly where multiple sites are involved – even though the cables that serve individual endpoints may still be made of copper. Fibre cable is generally much thinner than copper so it’s possible to pass more cables through the same ducting, making for greater network capacity.

There are a number of things which you need to take into account when you are deciding which is the best option for your network cabling.

For most businesses, cost is likely to be a major factor. Right now, copper cabling is still going to be cheaper than fibre. However, if you need shielded or other specialist types of cables, then the cost of copper can be much higher. You also need to consider the long term. Faster transmission speeds and higher reliability of fibre make it attractive as a technology that is relatively future proof.

We already know that speed is a factor. Fibre is reliably quicker over longer distances without the need to boost the signal as you would have to with copper. It’s more secure too and makes it much harder for hackers even if they have physical access to the cable.

You also need to think about the installation environment. In industries such as petrochemicals where there is a risk from sparks, copper cable will need to be shielded. Fibre has no spark risk so standard cable can be used. Similar considerations apply where electrical interference may be an issue. Again copper would need expensive shielding to prevent interference problems whereas fibre can operate normally.

Fibre can also stand up better to harsher environments without suffering. Copper can corrode if exposed to the elements and its performance can slow down in very cold conditions.

Which option you choose for your network will depend on the unique circumstances of your business. There are pros and cons on both sides but ultimately you need to look at which is going to offer you the best long-term advantage and deliver a return on your investment.

Why small businesses should automate their contracts