It’s no secret that the UK has a long and rich history of gambling. Games of chance have been enjoyed on this historically significant island for many centuries. Such a welcoming stance towards the pastime continues today too.

Glancing at the rows of high street bookmakers, fruit machine terminals in pubs up and down the land, and now the endless choices of online casinos and bookies, it’d be easy to presume that the UK had always been in favour of legalised and regulated gambling. However, this has not been the case. In this article, I’ll look at the gambling through the ages in the United Kingdom. 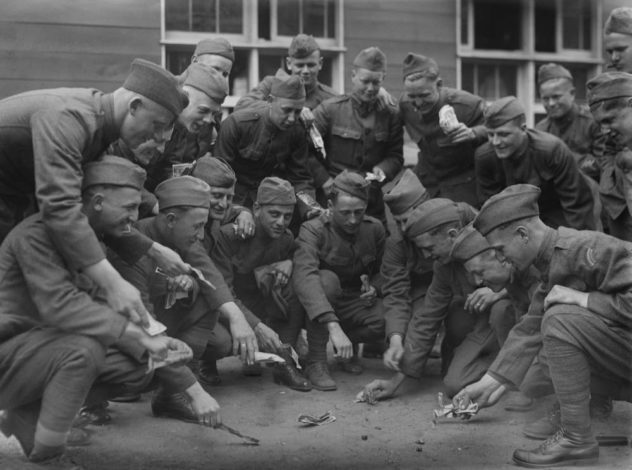 To trace the evolution of gambling through the ages in the United Kingdom, it’s first necessary to go right back to the beginning of our efforts at recording history. Evidence suggests that ancient cultures used the concept of chance to communicate with the gods. This would involve the throwing of basic dice or the drawing of lots. A common tool for divination used by these early people was known as the astragalus. It was formed out of the heel bone of a deer or other hoven creature.

Archaeologists now believe that these fortune telling rituals and communications with the gods morphed into primitive games between people using these early randomicity generators.

The ancient texts that still govern much of how our societies are formed also feature games of chance – with some rather high stakes too! The bible, for example, claims that King Saul of Israel’s election victory was ultimately decided by the drawing of lots.

Since its difficult to draw concrete conclusions about the habits of early people in these ages, we won’t dwell too much on their gambling preferences. However, it is certain that they were aware of chance and were frequent users of it in their spiritual, and likely recreational, pursuits.

By the middle ages in the UK, gambling had begun to resemble the forms that we recognise today. However, this section of history was marred with periods of hostility towards the pastime. Henry VIII, for example, stated that his soldiers were too easily distracted by games of chance, and thus, he outlawed them entirely.

OK for royalty behind closed doors?

By contrast, just years later, Queen Elizabeth I kicked off a trend that continues today – the funding of government using revenue generated by gambling. Interestingly, the prize for the first lottery draw that supported the government was a massive (for the day) £5,000 in cash. However, there was more. The victor would be immune from being arrested for petty crimes! Later still, James I and Charles I funded expeditions and London’s water system using revenue generated by lotteries. So, gambling in the UK has been vaired through the middle ages

The industrial revolution and Victorian period

As the years passed, the UK’s love of gambling refused to wane. Horse racing grew in popularity and with it betting. Something of a double standard emerged during the industrial revolution too. The government did not criminalise those members of the aristocracy partaking in betting on horses. However, the lower classes were not legally allowed to gamble. This hardly mattered to them since policing the issue was all but impossible. Rather than screaming their filly along trackside with the hopes of a big payday, these poorer folks would frequent pubs to play traditional betting games like pitch and toss.

Hostility towards gambling would grow into the 1800s. Following a series of fraudulent outcomes in horse racing, along with unfair lottery draws, and a general rising of piety in the population, anti-gambling sentiment was becoming louder.

This fed directly into the Gaming Act of 1845 and the Betting Act of 1853. These two pieces of legislation further enforced the already established double standard between the rich and the poor who wanted to gamble in the United Kingdom. The acts essentially outlawed most forms of gambling. However, exempt from prohibition was track-side betting, which was only enjoyed by those that could afford to attend the meets.

Typically, when something is prohibited that enjoys great popularity amongst the masses, the ban failed and just drove the those partaking in the activity further underground. Those who wanted to gamble illegally would do so in the streets. This led to yet more efforts to police the issue in the form of the 1906 Street Betting Act – a piece of legislation that proved hugely ineffective due to the lack of resources available. A different approach was needed.

Regulation in the 20th Century

It was obvious that the prohibition option was not working. During the first half of the 1900s, research was conducted into organised gambling in the form of two Royal Commissions. The idea was to explore regulated gambling to help to reduce the criminality surrounding illegal gambling, as well as to generate government revenue from the pastime. These commissions led to the establishment of The Game Board in the 1960s. This organisation would be responsible for providing regulated access to arcades, bingo halls, and casinos.

Rise of the internet

Having already enjoyed a much longer history of regulated gambling, the UK was one of the first to embrace the internet as a medium to deliver games of chance directly into people’s homes. The Gambling Act of 2005 would support the pastime through the formation of the UK Gambling Commission. This body would regulate all forms of legal gambling – casinos (online and real-world), bingo, sports betting, arcades, video terminals, and lotteries. Also, under the remit of the commission would be the providers of software for virtual gambling.

Such an early embrace of this new and disruptive technology would allow online gambling to truly flourish in the UK. However, there was a problem. Many providers were basing their businesses outside of the British Isles and offering their online products to the UK public. This allowed for the punters of the UK to enjoy a tremendous selection of different services. However, since the firms were regulated elsewhere, they were not obligated to support the UK through taxation.

To address this, the Gambling (Licensing and Advertising) Act was passed in 2014. Following this new legislation, it became a legal requirement for all providers to possess a licence with the UK Gambling commission. Those that were licensed by the UKGC would have to pay 15% of their profits to the UK government.

Naturally, this has shaken up the landscape a bit and some operators have decided to focus on other markets instead of the UK. However, since Britain has such a lengthy history of gambling, the market is still hungry for options to partake in a flutter. Thanks to this appetite, many gambling operators have decided to stay serving the United Kingdom since it remains one of the most active markets of the planet.

More recently still, there has been a shift towards stricter regulation. This mostly concerns problem gamblers in the UK and how operators can advertise their offerings. Regulations have targeted promotions offered by gambling providers – free bets, bonus money, etc. – as well as advertising of betting. The idea here is to help those most vulnerable to falling into problematic gambling problems.

Despite this recent tightening of regulations, there is little chance that the government will attempt to ban the forms of gambling that are now very much a part of our culture. After all, the UK industry generated a massive £14.4 billion in revenue from between 2017 to 2018 – that’s a lot of tax. With current financial worries over the outcome of Brexit debates, it would be a foolish move indeed for it to turn its back on that cash injection any time soon.

What are the penalties for being caught speeding?