If you’re a designer, or even someone just interested in internet trends, 2019 is shaping up to be the most exciting year thus far in web design. 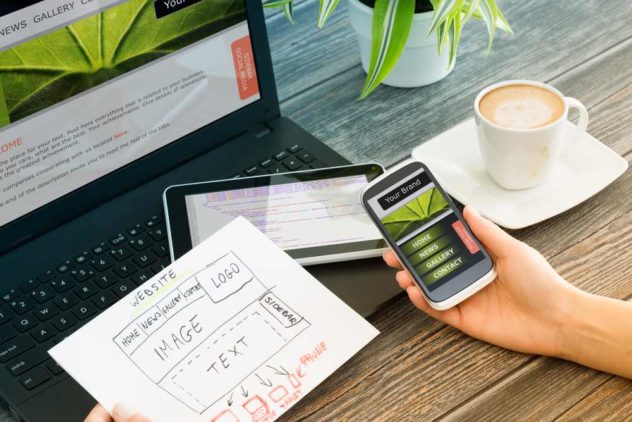 With a lot of additions to CSS3 and Google’s mobile-first indexing, the trend response has been fascinating. Let’s dive right in and take a look at 20 web design trends to look out for in 2019.

Flat design is a branch of minimalism, which we’ll talk about a bit later. This focuses less on borders, boxes, and shadows while focusing more on color cohesion and usability. It typically makes use of gorgeous gradients and bright, popping colors, but can also feature much more muted palettes for easier focus shifting.

We’ve talked about this several times, but it bears repeating over and over in case you just don’t get it. The days of complicated, noisy design are over. Users want clear experiences where their focus is drawn to relevant pieces of the layout, such as CTAs.

We’ve started discovering, as designers, that asymmetrical layouts are more eye-catching than symmetrical ones. The shift in visual weight also allows you to draw attention to specific areas of your website in a more organic way.

Websites like Statmic have opted to use high-contrast colorization in areas like the hero banner to evoke feelings of nostalgia. This particular design is decidedly 80s in its color scheme, but more relaxed late-70s layouts exist as well, sporting muted colors and prominent imagery.

Single-page design is making a huge splash, especially now that mobile devices are the primary consideration of most designers. Mobile screens are easy to scroll, and since most businesses can fit the bulk of their information on one page, designers are doing just that. It gives a continuous, flowing experience that can’t be attained with loading screens and navigation.

Web design Birmingham is a great example of how gradients are used, especially as an overlay in imagery. The use of relaxing colors makes that header look really attractive while drawing separation between the image and that hand atop it. Gradients have been in use for quite a while, but not quite as stylishly as they have been recently.

It used to be that Sans Serif was the only acceptable typography for web pages. At larger sizes, however, serif fonts are making a comeback. Although they’re usually employed by authoritative or legal companies, their prominence hasn’t gone unnoticed.

Blame or thank Google for this one. Their announcement of their mobile-first indexing standards in 2018 sent a stir through the design community. AMP and responsive designs don’t cut it for Google in this case; it’s all about mobile-first.

It used to be that JavaScript was the only way to implement animation, but that’s no longer the case. CSS can be used to handle all kinds of hover and click animations, and quite frankly it looks just as good as it did under JS.

Video is huge. Our eyes are instinctively drawn to movement. Designers are taking advantage of this by implementing the use of video on landing pages, as well as autoplaying background video on hero banners. Combined with split screen, it looks fantastic.

The expansion of the internet to all parts of the world means that various cultures and ethnicities require representation. A lot of designers are opting to get images of people from differing cultures. It’s past time that folks be represented, especially on big-name brand sites.

When you think of Brutalism, think Craigslist. Sometimes described as “bare bones,” this method suggests that raw HTML is automatically readable on all devices. Only design renders things unreadable and complicates the process.

Split screen is just a horizontal split between two connected elements. It’s big, bold, prominent, and exciting. It gives clear separation between elements while also making the most of a fixed amount of vertical space.

The introduction of grids in CSS has opened up enticing new designs, from portfolio sites to things like Jen Simmon’s Experimental Layouts Lab. Grids are having a huge impact on the ease and responsiveness of design.

While variables are nothing new to most programming languages, CSS now allows you to use variables throughout your document, while defining them in a :root pseudo-element. This is something Sass has had for a while, so it’s good to see this being introduced in plain CSS.

Some of these are more obvious, like the notification symbols on Facebook or Twitter. Others are more enticing, like the mouse-movement response on the aforementioned Hello Monday. Move your mouse around and watch how the image shifts. It’s a great little micro-interaction.

Since users typically hold their phones from the bottom, designers have been moving mobile navigation to the bottom area. While this seems obvious, hamburger menus have long been in the top corners of mobile websites, despite mobile apps taking advantage of bottom placement already.

Much like the hero banner is the prominent, bold image header on the website, expect to start seeing a lot of “Hero text.” Large and high-weight typography on front pages (usually as sans serif). It looks great on mobile devices and absolutely dominates the view on desktop screens.

Typically, designers prefer that elements either don’t touch or are kept adjacent to one another. However, the overlap trend is making waves and has interesting asymmetry to it. Take a look at Slack’s website for a good example. It’s also a great way to establish connectedness of ideas.

The design industry is a fickle thing. I think that small-time indie sites are going to go for more brash and saturated color schemes with unconventional layouts, while prominent companies and corporations will opt for subdued colors. The trend of opposition continues in web design, I think, so let’s see if I’m right!

How to brand your new startup