A spreader bar is a tool you can use when doing the crane-assisted lifting, which works by taking the load below the hook. This is specifically used when lifting very heavy or large increments that need something to spread the loads to avoid accidents.

The spreader bar works by spreading or more evenly distributing the load you’re trying to lift over a greater surface area. Traditionally, when lifting something with a crane, you’ll be lifting it from one location. This can cause the load to become unevenly distributed, especially if it’s in an awkward shape, and may cause lifting to become difficult. A spreader bar is often used if the load isn’t appropriate for several slings to be used to lift it, and something needs to be placed underneath to keep it stable. 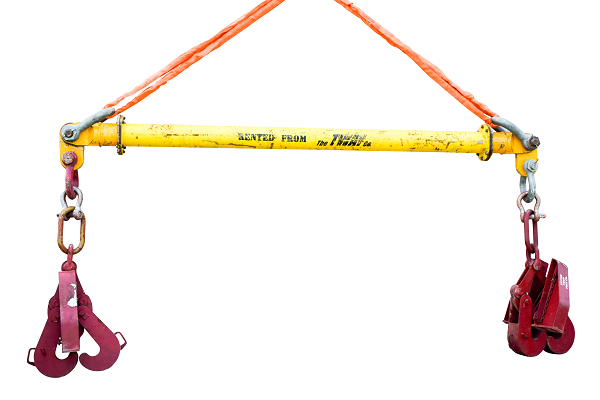 There are several types of a spreader bar, including spreader beams, standard spreader bars, and then using several of these together to achieve the task. If you’re interested in hiring a spreader bar for your project, make sure to check out Tway Lifting for a great range of options.

There are several styles and options for below-the-hook lifting devices that can be used to accomplish this. The styles include the spreader bar, the spreader beam, and using multiple spreader bars stacked together. These options are discussed below.

The standard design of a spreader bar is a long bar with two areas to attach the load to the bottom, and then another two which are attached up to the crane. The lines going down to the load being lifted go straight down vertically as much as possible to make sure there’s a direct connection to the bar and to ensure a safe lift. The lines going up to the crane then go up diagonally towards each other to meet at the top of the crane at one place. This setup allows you to attach the object being lifted at two points, which spreads the load more evenly and makes for an easier lift. The bar is specifically made to be extremely durable, so that it can handle the two loading points without any bending or breaking. The design is done in such a way that even very large spreader bars, which can reach lengths of over 60 feet and more, are loaded consistently through the bar, rather than at one set point, making them very safe for any job.

These are different to spreader bars in a few ways. The main difference is that spreader beams have only one area you load on the top of the bar which attaches to the crane, and then multiple loading areas on the bottom of the bar to attach to whatever you need to lift. The main advantage of spreader beams compared to bars is that you can spread the load over more areas than just the two that spreader bars allow for. This is useful for loading things that can’t support themselves when being lifted from just two places.

How to manage high maintenance employees