Many of us aren’t sleeping as much as we should and instead rely on caffeine and willpower to make it through the day. When workloads and responsibilities pile up, sleep is often one of the first things to go.

Sleep deprivation has consequences beyond simple exhaustion— it can affect your work and even your productivity. We’ve put together a list of 6 ways that skipping sleep can affect work performance. 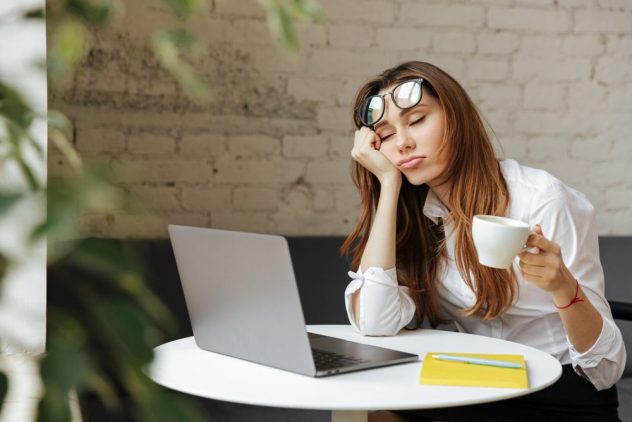 There’s no way to avoid the consequences of sleep deprivation other than by getting a good night’s sleep, so be sure you’re putting yourself to bed on time every night.

You’ve probably noticed that losing sleep can make anyone cranky. And cranky people do not tend to work well with others. Skipping sleep can impact your interactions with coworkers and clients, while your mood can improve if you catch a full 8 hours.

Your mood can also affect the amount of sleep you’re getting. If you’re feeling anxious or stressed, it can keep your body in a state of alertness that prevents you from falling asleep.

Combine all these factors and more, and you might not be surprised that people who sleep more have a better life expectancy. If you have the habit of sleeping five hours or less, your risk of dying can jump up by 15 percent, according to the Division of Sleep Medicine at Harvard Medical School.

There’s scientific evidence that your brain doesn’t work at its best if you’re sleep-deprived.

A 2010 review found a lack of sleep can slow response speeds and cause your alertness and attention levels to drop. The review noted researchers are still unclear on how much sleep deprivation can impair your higher functions.

Slower response time and decreased alertness can add up to misfortune and tragedy. A 2017 study on truck drivers found that drivers with insomnia reported significantly higher amounts of accidents and near-accidents.

There’s also the suggestion that consuming stimulants does little to counteract the effects of sleep deprivation and restore cognition. A 2018 review hypothesized that the improved performance from consuming caffeine may come from reversing the symptoms of caffeine withdrawal, rather than from counteracting sleep deprivation.

You’re less likely to be creatively inspired when you’re sleep deprived, according to a few different studies.

A 1988 study examined 24 subjects, 12 of who had gone 32 hours without sleep. Subjects answered figural and verbal questions that tested their creative thinking, and sleep-deprived subjects consistently scored low on flexibility and original thinking. A 2016 study found that sleep helped strengthen new memories in a verbal creativity assignment.

You also hear the occasional story of how someone worked out a problem through a dream or was inspired to invent something by a dream they had. Often you have your best dreams during the REM sleep phase, and you can experience less REM sleep if your sleep is reduced or interrupted.

If you miss out on sleep to get more tasks done, you’re not actually gaining productivity so much as you are losing productivity later on. A 2011 telephone survey from Harvard Medical School found that U.S. workers with insomnia lost about 11.3 days of work because of subpar performance.

Those who are extremely sleep deprived may find their perception becomes distorted, according to a 2018 review. Symptoms can include hallucinations as sleep deprivation worsens. The review notes there is no concrete answer as to how long a person needs to go without sleep to hallucinate as making subjects go without sleep for more than 48 hours is considered unethical.

Researchers in a 2016 study observed a far less extreme sign of distorted perception— false memories. Otherwise healthy young adults and adolescents were observed after skipping one night of sleep and after sleeping a reduced amount for a week. Sleep-deprived subjects were more likely to give misleading information when recounting their memories.

How much sleep is enough sleep? The exact amount of time needed for a good night’s sleep varies from person to person, but typically most people need 7 to 8 hours.

To improve your sleep habits, pick a bedtime and establish a routine to help you wind down every night, such as taking a warm bath before bed. Put away your electronics and avoid caffeine too close to bedtime, as the two can keep you awake. And stick to your bedtime routine on the weekend— no staying up late or sleeping in. If you follow these tips, you should see your sleep and work performance improve.

How entrepreneurs can have less stress by improving sleep quality

Everything you need to know about self-employed health insurance

6 must have apps for technology entrepreneurs

Why we all need a career MOT

Dominic Lill - March 1, 2017 0
Professionals are increasingly leaving it until it’s too late to check the health of their career, and employers are not encouraging self-improvement in fear...
We use cookies. To learn more, read our Privacy Policy.Ok