Gambling has remained a thriving business for decades in the UK. The advent of online casinos and sportsbooks, later followed by mobile betting, has only made the industry bigger than ever. Digital convenience has made it possible for Brits to play their favourite casino games or bet on their favourite sports, when they want, whenever they want.

Many betting brands have benefited from the digital betting world, including Ladbrokes. The operator is one of the main betting sites currently operating in the UK, along with Coral, with whom Ladbrokes merged back in 2016. Together, Ladbrokes Coral – which is now owned by GVC Holdings after a multi-billion-pound deal made in 2018 – is the UK’s biggest High Street bookmaker. 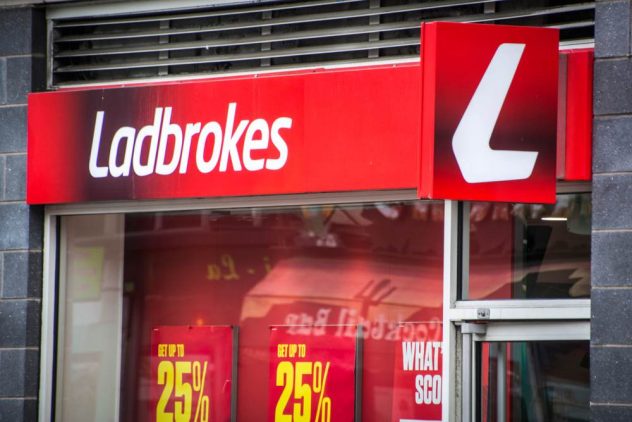 However, in spite of being very prosperous in the UK, new betting laws and the potential for stricter regulations has GVC and other major betting brands, like William Hill and Betfred, considering moving some of their operations outside of Britain in 2020.

When Ladbrokes Coral merged, the company had 3,500 High Street outlets and over 25,000 employees. However, this changed when the government reduced the maximum stakes on Fixed Odds Betting Terminals (FOBTs) from £100 to £2 in April of last year. This change was made in an effort to help combat Britain’s increasing number of problem gamblers.

GVC blames the FOBT stakes cuts for it having to shutdown 900 Ladbrokes Coral high street shops, which affects as many as 5,000 of its staff. The first three months of the new FOBT stakes rules reportedly saw a steep 19% decline in overall revenue. As for Ladbrokes, Gala and Coral, their shops saw a 10% fall in revenue. That being said, it’s also worth noting that GVC also had an 18% increase in its online operations.

In spite of this increase, GVC plans to move many employees out of the UK, intending to shift 200 customer service jobs from its Barking location, offshore to Gibraltar and Manila in the Philippines.

According to The Guardian, the company said in a statement that “Following the acquisition of Ladbrokes Coral [in 2018], GVC has conducted an extensive review of its operations to ensure the business can best meet the needs of its customers while adapting to the changing regulatory circumstances in which it operates.”

The Barking customer service centre was expected to close by the end of 2019.

VIP schemes could be banned

Even though online gambling seems to be on the rise in the UK as it has been for the past decade, the nation currently has one of the strictest regulatory bodies in the world – the UK Gambling Commission (UKGC). Any gambling operator who wants to offer their services to UK residents must apply and obtain a license from the UKGC. If a license is granted, operators are required to adhere to a number of stringent policies, including those that apply to player data protection and responsible gambling.

Over the past few years, the UKGC has started to crackdown on its player protection regulations, and this doesn’t only include its support of the slashing of the max FOBT stakes. The regulator is also considering making other major changes to reduce the betting industry’s reliance on problem gamblers. One of these changes could lead to the banning of VIP schemes, which are loyalty programmes that almost all online casinos and bookies offer, including Ladbrokes and Coral.

Why is the ban being considered? The Gambling Commission gathered data from betting firms and found that the industry relies heavily on VIP schemes, with one firm they reviewed taking 83% of its deposits from 2% of its players. The 2% of players was the site’s only VIP customers.

VIP programmes have long been criticised for rewarding gamblers who lose large sums of money on a regular basis with perks such as cashback and free bets. It is seen by many as encouraging and perpetuating problem gambling among those who take part in these schemes.

Additionally, the award of VIP status has been cited as a factor in several penalties issued to companies by the Gambling Commission for failures to prevent problem gambling. One of these companies was Ladbrokes.

In 2018, it was found out that Ladbrokes had been showering one of its VIPs (who was also a gambling addict), with thousands of pounds worth of gifts (e.g. business class flights, football tickets, etc.) over two years. However, Ladbrokes later learned that the addict had been stealing from his clients to fund his high roller (up to £60,000 a day) gambling habit. In an attempt to avoid running into trouble with the Gambling Commission, Ladbrokes agreed to pay £1 million to the victims of the VIP problem gambler. Naturally, this didn’t stop the commission from finding out and looking into the matter.

That said, it’s not only Ladbrokes who has been penalised by the regulator. William Hill, 888, SkyBet, Betfair, and Paddy Power have all paid millions in fines.

The government wants changes, too

It’s not just VIP schemes that could be banned or face new laws, the Conservative government is keen to review the Gambling Act and tackle certain issues such as banning credit card use when playing online.

Additionally, the Gambling Commission has advised governments that it wants to further explore player protection options, such as tracing play, communicating messages about gambling safety and use monetary and time limits and alerts. The regulator is also examining the implementation of gambling blocking software and improving the way operators interact with customers.

With Brexit looming, new laws, and the changing gambling landscape in the UK, it won’t be surprising if other offshore moves are made by GVC and other big-name UK betting brands this year.

This is especially likely as more and more British betting brands are eyeing to make a profit from the evolving and increasingly highly lucrative US sports betting market.

How to start a successful sports betting business in 2021