Team structure may not seem like the most important issue for small businesses. Usually, we think of large corporations as ones that need firm and predictable team structures, while small companies can do just as well by relying on improvisation and some sort of informal hierarchy.

However, this is not exactly the case. Even the smallest of companies need at least elementary team structures to avoid confusion and help determine accountability and chain of command. 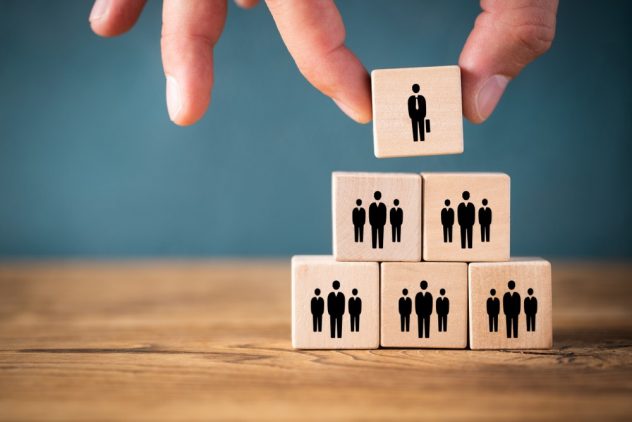 Here are some of the most common and convenient team structures you can use for your small company. Take into account that some team structures overlap to a certain extent, emphasizing different aspects of what seems like very similar hierarchies.

Line structure is the most basic and the most traditional type of structure used in all kinds of organizations. This means that there’s a CEO on the top and a certain number of directors and/or managers just below. The managers and directors are in charge of their distinct departments. Every employee belongs to one of the departments and the head of the given department is their direct superior.

This hierarchy is simple and intuitive, with well-defined roles and responsibilities. It may be appealing to companies and employees that prefer predictability, stability and well-established routines in their day-to-day activities.

Still, fewer and fewer new companies tend to choose this framework, and today it resembles more of a military or religious hierarchy than a business organization. Due to its rigidity, the line structure is not always capable of adapting to the needs of a specific business. It actually tends to accommodate work processes to forcefully fit this strict hierarchy even when this doesn’t do any good for the company.

Furthermore, this structure lacks the interconnectedness of different departments. This means that it’s not suitable for businesses that demand company-wide cooperation between different teams on a daily basis and creative solutions that arise from this cooperation. All this puts too much pressure on the CEO, the only person that has an idea about what’s happening in separate departments. CEO basically makes all the important big-picture decisions, which may be a bit too much even for a competent leader.

Line and staff structure relies on the previously explained type of organization, but with a little twist.

Here, the hierarchy is less rigid. We can see members of staff being involved in making important decisions. They act as highly-skilled advisors whose technical knowledge of the work is so important that they get to actively participate in developing strategies and planning the company’s next moves.

Executives and managers can also be trained professionals in the field, but they may be a bit detached from the everyday workings of the company, unlike staff members. Giving the staff more authority and letting them make decisions based on their experience and competence can help companies overcome some of the problems that come with the traditional line structure.

In my experience, this move can also give a sense of importance to your staff as well as hope that they’ll have a chance to grow and develop in your company. Reducing the gap between employees and executives is very beneficial if you want to prevent your workers from becoming disillusioned and discouraged.

Looking at the diagram, the functional structure resembles the line structure as well. However, the essential difference lies in the lines of communication that are less rigid and imply cooperation between different managers and departments.

This means that managers can communicate with teams that are not under their direct supervision. For some businesses, this is critical.

For instance, a marketing executive doesn’t have to be a part of the sales team structure in order to cooperate with the team closely, which is hugely important. Marketing and sales, like many other departments, need feedback and guidance from each other, so there has to be an open line of communication between them. The functional structure ensures decent interconnectedness between teams, as opposed to the traditional line structure.

Apart from being built around people with similar skill sets and roles, teams can be divided according to specific products they’re working on. In bigger companies, every one of these teams can be a small company of its own, with different mini-departments working on different aspects of the same product.

This structure is great for businesses that sell multiple products that don’t have that much in common so that obtaining knowledge about one of them doesn’t necessarily mean getting familiar with the others as well. In this way, teams can benefit from the lack of “noise” and focus on one particular task.

However, in practice, small companies usually don’t have the resources to assemble a different team for every one of their products, or even product types or lines.

Also, there’s a scalability issue here. Products will grow and fall in popularity, which means that teams built around them will often have to be expanded or downsized. Obviously, hiring and firing people every time this happens is not the best idea. And it’s absurd to move people around from one department to another inside a structure that’s built particularly to ensure they’re focused on their very specific task.

This organizational model is very dynamic, flexible and great for those who strive for new challenges and have no fear of breaking out of their comfort zone. It also gives you the freedom to mix people with various skill sets and various personalities to see how well they work together and then apply this knowledge when assembling future teams, getting better and more efficient combinations.

With this structure, all team members are focused on a highly specific task and can direct all their energy to successfully completing their part of the puzzle.

On the other hand, the greatest strength of project-based structure seems to be its greatest weakness as well. Lack of stability, rigidity and fixed leadership can be disturbing for some employees and can potentially create confusion. The process of adaptation to new faces and new tasks may be quite difficult sometimes.

Finally, in order for this structure to be effective, you’ll need a large enough pool of well-trained, knowledgeable and versatile workers that can easily readjust themselves to new demands and environments.

The matrix structure combines multiple different approaches, for instance, functional on one side and project-based on the other. In this example, every employee is at the same time part of a certain department (e.g. IT, marketing, sales, HR) and a part of a separate team working on a specific project.

This means that every employee has two “bosses” so to say – one based on their role and another based on the project they’re assigned to. Of course, if a project is supervised by multiple people and departments it’s easier to spot all kinds of issues and errors. And often, more input and more feedback from different managers can lead to quicker, more accurate and more creative solutions to various problems.

However, this is not always the case. If two managers have conflicting ideas, executing even the simplest tasks can get very confusing for their teams. This also leaves the issue of accountability wide open, as it can be quite difficult to determine who’s responsible for which parts of the job and which specific decisions and actions. If you choose to go with the matrix structure, it’s vital to have flawless communication and understanding between employees and different managers, as well as among managers themselves.

There are numerous other ways to organize your team. For instance, you can build it around different locations, markets or customers. You can even make all kinds of dynamic, ever-changing, weirdly-shaped and loosely-managed team structures. There’s a huge field of possibilities and a lot of businesses choose to go for some sort of hybrid approach that gets further modified according to the companies’ needs and goals.

That being said, it’s impossible to pick one structure and claim it’s the best one for small businesses. It all depends on your industry, your ambition, your strengths and weaknesses, the size of your business, as well as the company culture you wish to establish. There’s no perfect formula. You’ll just have to take your time, think it through and see which team structures fit your business needs best.

How can you boost productivity in the office?