In spite of the global economic downturn as a result of the COVID-19 pandemic, classic car sales are still doing relatively well in comparison to the standard automobile market – online auctions are still taking place, and online collectors are still buying privately.

As you’ll see from this list, the original Mini Cooper is still one of the most popular classic cars for sale, despite Hagerty reporting that the interest in 1950s British and American classic cars has dropped. 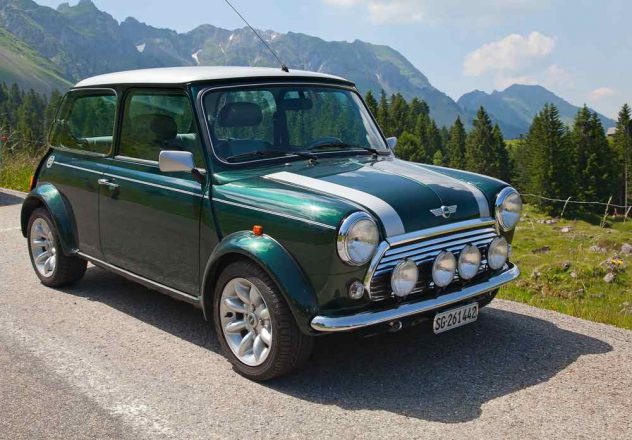 However, the demand for affordable vehicles – those costing less than $30,000 – is on the rise across online classic car listing platforms due to certain cars decreasing in presence, and thus increasing in value.

With that in mind, you should be looking at these top six affordable classic cars for sale in 2020.

Voted the second most important car in automotive history, the Mini Cooper gave the masses affordable performance wrapped up in a compact body shape. The Mini was originally conceived as the British rival to the Italian FIAT 500 and the BMW Isetta – both two examples of microcar that became increasingly popular in the late 1950s. The Cooper model featured a 997cc motor (as opposed to the 848cc unit in the standard Mini) and 55bhp. It also had a race-tuned engine, twin SU carburettors, a closer-ratio gearbox, and front disc brakes which were unusual for the time. The more powerful Mini Cooper S was developed in tandem with the Mini Cooper, and put the little British cart on the world stage thanks to its heroics in the World Rally Championship. However, the Mini’s finest hour perhaps came when it was the star of the 1969 British caper movie, The Italian Job. Prices of a later Mini Cooper begin at less that $10,000, but the cost of an early model will cost much, much more due to dwindling numbers.

The Audi 100 C3 was what should be considered the genesis of all modern Audi cars. Whilst cars built by Audi during the 1970s were sturdy, they weren’t exactly performance orientated. Yet when Audi discovered the benefits of designing a car with aerodynamics in mind, they used this concept to design the then-new Audi 100, which had a very low drag co-efficiency of 0.30. In non-technical terms, this translates as slippery as a water snake in a bucket of Jello and Audi were very proud of this – in fact, some models have a sticker in the window denoting “cd 0.30” in the window, which is the car’s aerodynamic efficiency in a wind tunnel. Almost 40 years later, the original Audi 100 still looks great and it is rapidly growing in status as a modern classic. Even better, is that there are plenty of good ones available for around the $10k mark. Models fitted with the Audi quattro system and 2.3-litre turbo five-cylinder engine are also highly desirable – get one of these, and you’ll have one of the greatest sleeper cars around!

Once unfairly considered to be the “worst” 911 by purists, the 996 is finally getting the critical acclaim it deserves because it is – in the words of Doug DeMuro – “the best 911.” Launched in 1996, the 996 was criticised for a number of reasons; predominantly its water-cooled engine, which was a break from the traditional air-cooled unit that had powered 911s of yore, and its droopy “fried egg” headlights it shared with the smaller Boxster model. Yet attitudes towards the 996 have started changing in recent years. Its once-quirky looks are now appreciated, and it is also considered to be one of the last mechanical 911 with its naturally-aspirated engine, passive rear-axle, and mechanically-assisted steering. Prices for the 996 start for as little as $20k. It’s incredible how the ugly duckling can turn into a beautiful swan, isn’t it?

Big? Yes. Brash? Yes. British? Very. The Bentley Arnage is a monster of a car. At over five-metres long, it’s almost two metres wide, it’s big enough to be given its own landmass. Step inside, and its interior is a Victorian Gentleman’s Club decked out with swarthes of wood (yes, real!) and fussy dials fashioned from expensive metals. Unsurprisingly, running an Arnage is not cheap – there are the engines to choose from: the ‘small’ 4.4-litre V8, the 6.75L V8, and on later models, a 6.8L V8. Thankfully though, buying an Arnage doesn’t have to be an expensive affair. Big Bentley Ownership can be had for around $25k or less, with early Arnage models from 1998/1999 costing just that. Later models, however, will cost more. Tempting, right?

With the exception of the Arna, Alfa Romeo has always hit the spot when it comes to making pretty cars. Even in the 1990s – a period of time not widely regarded for its fine car design – Alfa kept doing what they do, which is making good looking cars with bags of personality. The Alfa 155 was no exception, especially when compared to other four-door sedans of the time. With the 155 Q4, Alfa took its standard family saloon and mated it to the four-wheel-drive system and 190bhp, 2.0-litre turbocharged engine from the Lancia Delta Integrale – the fifth most successful World Rally Car of all time. The results were as you’d expect, and the Q4 had plenty of power and plenty of grip. In true ‘90s Alfa Romeo fashion, the build quality of the 155 Q4 was also a bit naff. Does that stop us from loving it, though? Not a bit!

Described as “rare as hens teeth” by Modern Classics magazine, the Peugeot 405 Mi16 was born during the late 1980s – a time when the French manufacturer was producing incredible cars such as the 205 GTi. It didn’t have the GTi moniker, but the 405 Mi16 is now considered to be one of the greatest Peugeots of all time. Its subtle-yet-sporty bodykit won it plenty of fans as did its razor-sharp handling. However, it was its peppy, all-aluminium 158bhp, 4-cylinder 16-valve engine that stole the show and even now, it’s still being praised for its driveability. Nobody really knows why there are so few Peugeot 405 Mi16s on the road anymore, but they’re around and available for the sub-$10k mark. Peugeot even made a handful of these for the US market, so stateside buyers will not have to worry about import costs. Move quickly though, because like the Audi 100 we spoke about earlier, they’re growing rapidly in demand.

Easy ways seniors can save money on their car insurance

Top 3 cars to purchase on finance