2020 has been a tough year for small and medium businesses. Even though there are strategies for pandemic planning, you can’t solve COVID-19-related problems in all businesses. Some are just more susceptible to decreased growth simply because they are either selling a product affected by the lockdowns or a product that people don’t buy that much during a crisis.

So who’s getting ahead during this healthcare crisis apart from the largest companies that can afford to stay open? These five industries happened to be in the right place at the right time and are growing despite COVID. They are uniquely positioned to bloom in the conditions of the lockdown when people are quarantined at their homes. Here are these five industries that are growing despite the ongoing COVID pandemic. 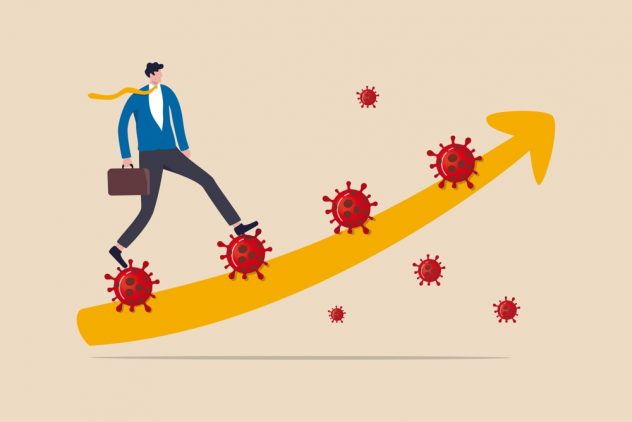 Netflix, Hulu, and other streaming services have been extensively growing in 2020. Granted, many of them rose to prominence way before 2020, mainly because of the quality of the shows they were putting out. If you remember the Stranger Things craze, you know what we’re talking about.

However, when the first lockdowns were enacted in most countries, these services started growing exponentially. At the beginning of 2020, Netflix saw an increase of 16 million new accounts created. This promptly raised the revenue to $23 billion for the year. Hulu saw great growth as well, adding 10 million new users to its 20 million user base.

These platforms did get hit with the rest of us as well. Since their growth relies not only on people stuck at home but also on hit TV series being released on schedule, they’re having trouble. Because of COVID-19, many prominent series were put on hold and only restarted recently but the platform is still growing despite these issues.

The gaming industry has also seen significant growth during the active phase of lockdowns. With people under the lockdown order having a lot of free time on their hands, gamers who didn’t have much time off work came back to their hobby. Tons of new people also joined this pastime, as evidence suggests.

One of the biggest console manufacturers, Sony, has sold 1.5 million consoles at the beginning of the year — significantly more than the previous quarter. And that all happened six months before the release of a next-generation console, PS5.

Steam, one of the biggest video games seller, also saw great growth in March of 2020 as lockdowns were rolling out. The sales numbers were the highest in March and September, going down during the summer. This is possibly due to the lockdowns being much more lenient during that time of the year.

However, the gaming industry suffered for the same reason as the video streaming industry. New releases of AAA games were put on pause as developers struggled to work from home.

Land-based casinos are not legal in every country in the world. In many countries like the UK and Australia where it’s legal to gamble in casinos, this industry took a big hit as many gambling parlors and clubs were closed due to Covid-19. However, this meant it was time for online casinos to shine.

It’s hard to come up with accurate statistics on this industry globally, but in the UK, online gambling grew 8% in 2020, a much bigger growth than in the previous year. One of the leading Australian providers, Uptown Pokies casino, also reports similar numbers, having grown their userbase and revenue 10% as opposed to 5.3% last year.

As much as certain entertainment industries grew during the COVID-19 lockdowns, people still need to work. Despite the fact that most tasks in a modern workplace can be done remotely with the only mode of communication being email, teams still need to meet in person to brainstorm some ideas.

This is where Zoom and other conference call apps step in. Without the opportunity to use these services to hop on a quick video call or discuss an important detail at length, many companies would struggle to keep the productivity at half the pre-lockdown level.

March of 2020 proved to be the breakthrough month for many companies like Zoom. Zoom itself added 200 million new users at the beginning of the year, Skype saw a 70% increase in subscriptions. These companies were not hurt as much as the video streaming industry by lockdowns — they only had to work extra hard to keep their servers up to accommodate for the influx of users.

Not everybody was binge-watching the latest season of their favorite serial killer documentary on Netflix or teaming up with friends for a match on Steam in 2020. A lot of people took it to online education platforms to learn new skills while stranded at home.

EdTech platforms like Skillshare, Udemy, and plenty of others reported significant growth during 2020. Skillshare increased its subscriber base from 5 to 12 million. Udemy experienced subscriber growth as huge as 457% in a single month. This is even higher than the average in the industry, which is reported to be 290%.

In terms of struggling to keep up with work despite the lockdown orders, EdTech was caught in a position alike to both video streaming and video conference services. On one hand, these platforms only had to grow the number of their servers to keep up with the sudden growth. On the other hand, many of these platforms depend on new courses being created and that has been stifled a bit by the impossibility to gather in the office.

Unfortunately for most businesses both big and small, there’s no end to the lockdowns in sight as of yet. With the UK rolling out new stay-at-home orders, most businesses will have to buckle up for a bumpy ride, while these five industries will probably continue growing despite COVID.

Things that you should consider before buying a business