Toggle clamps are tools that are used to securely hold parts or components in position as part of many production processes.

Toggle clamps are designed to enable the operator to secure and release components quickly and easily. For repetitive manufacturing processes, this can speed up production times significantly. 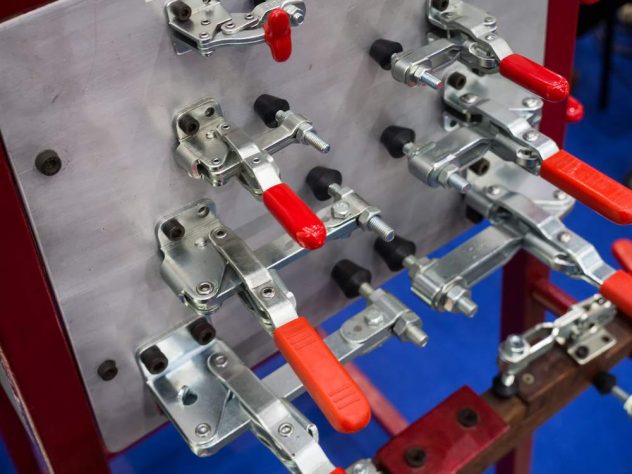 Why are toggle clamps useful?

Toggle clamps aren’t only used on production lines; they are also used to hold components on work surfaces securely. The clamps themselves are usually fixed to a mounting. The fast action mechanism they use means they can easily be engaged and released with a single quick movement. Once the toggle clamp is engaged, it is locked in place by a system of pivot pins and levers.

Toggle clamps are versatile tools that are found in a broad range of environments. They have applications within automotive plants, food manufacturing facilities, engine testing, and even munitions production. Wherever there’s a need for a solid yet flexible means of holding a workpiece in place, toggle clamps are a popular option.

What are the benefits of toggle clamps?

The primary benefit of toggle clamps over other alternatives is that they are quick and easy to use. Toggle clamps are effective at holding objects in place and require relatively little force to provide a tight and reliable grip. The mechanism can also be engaged or released easily, enabling users to switch out workpieces rapidly. Strap clamps are a common alternative to toggle clamps, but they take longer to set up and don’t clamp with nearly as much force.

Overall, toggle clamps enable much more efficient production and can speed up production output significantly thanks to how easy they make it to load and unload pieces.

Other common types of toggle clamp include the plunger action, known as a ‘push action’ or ‘push-pull’ toggle clamp, hook action toggle clamps, and cam action toggle clamps. Each of these clamps uses a different mechanism and has slightly different use cases, but the benefits are the same. Trying to use the wrong type of clamp for any production line will nullify the usual benefits.

Toggle clamps are versatile tools that can speed up many production processes dramatically. However, to get the benefits of this tool, you need to choose the right one for your situation. Before selecting your toggle clamp, you should clearly define your project’s parameters, what it entails, and what role the clamp will play. Once you know how you will use the clamp, it’s much easier to work out which type will work most effectively

Some of the things you have to take into account

The size of the components is a vital consideration, as well as if they vary in size. Another key factor is the ability to access the components, that is the space around them when they are on the production line. Access can be needed for a variety of reasons, such as needing to use a welding gun or a torque wrench. Then again, for reasons of safety, it may be necessary to provide a secondary locking system.

From all this you may have gathered that selecting the right toggle clamp for any application is not as easy as it looks, or that the one you need is not available off the shelf. This is where the services of a company like Sandfield Engineering in the UK are required. They are World renowned toggle clamp suppliers and are sure to be able to help you, their custom toggle clamp service ensuring that they can meet every need.

Besides using a toggle clamp, they also provide other equipment for production lines, such as robot grippers, bowl feeders, linear rails and toggle presses.

They can also help you set up a production line, their intimate knowledge of the human processes involved in a manual production line set up allowing them to create a system that increases the efficiency of your line, seamlessly moving the products through the manufacturing process. Where needed they would introduce vibratory bowl feeders, these being very useful where components have to be in a particular orientation during an assembly process.

5 benefits of implementing ERP software for your manufacturing business

Why UK manufacturers need to embrace robotics and automation