If you are a creator, you know that engaging your audience can be quite a complex task. The first thing you will be judged on is the quality of your content. If it happens to include audio, you cannot underestimate its importance. Having clear, loud sounds is of key importance to the overall production quality – especially for vloggers and musicians who want to make pro recordings. Audio done right helps the audience connect, both rationally and emotionally, which dramatically increases the impact of your content. 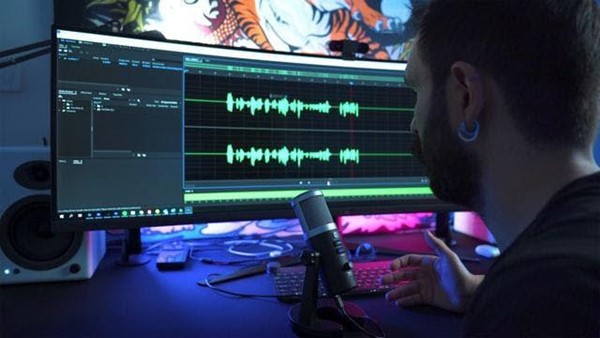 Unfortunately, even fantastic-looking videos can fall victim to bad sound. While you certainly don’t want to let your hard work go to waste, it’s no secret that recording clear audio can be a real challenge. For example, no amount of experience will help if your recording environment is excessively noisy and your equipment sounds lacklustre.

However, you absolutely don’t need to rent a professional recording studio in order to sound professional. A reasonably quiet room and a decent microphone that rejects most ambient noise (such as broadcast and lavalier mics) are strict must-haves for pro recordings. If you are recording audio into your computer or smartphone (instead of straight-to-camera), the next link in the chain is a great audio interface. Not only do the best ones sound pristine, they also fit your ambition and help you thrive.

The recipe for professional recordings is a great performance that’s captured with the best means possible and produced to really make the most of it. That’s less challenging than it sounds because audio interfaces have come a long way. The Zen Tour Synergy Core, a professional audio interface manufactured by Antelope Audio, lets you record a rock band and polish the recordings with studio effects while fitting neatly on your desktop.

Why use the Zen Tour Synergy Core?

In general, professional recording facilities used to maintain a gap between them and project studios in terms of the equipment and production capabilities available. For example, only the pros could obtain the kind of pristine AD/DA audio conversion that once required incredibly expensive, potentially very complex setups. The same goes for the processors, such as equalizers, compressors, reverbs and delays that make raw performances sound “like a record”.

Presently, things are different. The Zen Tour Synergy Core features ultra-linear preamps and extremely precise converters with large headroom and proprietary digital clocking. The result is performances being captured exactly as they are, without a single detail lost or misrepresented.

Furthermore, the interface offers highly capable effects processing for both the recording and production stages. The integrated Synergy Core signal processing platform lets you load up to 112 effects instances without straining your computer. Synergy Core effects recreate the classic studio equipment that contributed to your favourite records sounding the way they do. Built upon extensive studies of the original hardware, Antelope Audio’s digital models sound indistinguishable from the real thing.

You may be wondering how exactly is this possible? The Synergy Core platform owes its exceptional processing capabilities thanks to a combination of two kinds of processors – FPGA and DSP. Merging the best of both technologies makes it possible to run complex studio effects in real-time, with room to spare.

This in turn will bring you two advantages:

By removing all technological barriers to impeccable audio quality, the Zen Tour Synergy Core lets you focus on capturing and producing your winning performance. To that end, the interface is equipped with the following audio inputs and outputs:

It is also worth adding that the Zen Tour Synergy Core’s connectivity can be expanded through ADAT & S/PDIF. This way, the interface can grow with your needs over time.

All in all, the Zen Tour Synergy Core is a unique device that will profoundly change the way your work and how you sound.