Half of the internet’s leading web stores are built on one of three eCommerce platforms – WooCommerce, Shopify or Magento. Each of these technologies has its strengths and weaknesses, but which is right for your business?

Selling online demands eCommerce platform technology that’s secure and stable. More than that, it needs technology that flexes with the way you do business – without racking up ruinous bills and charges. 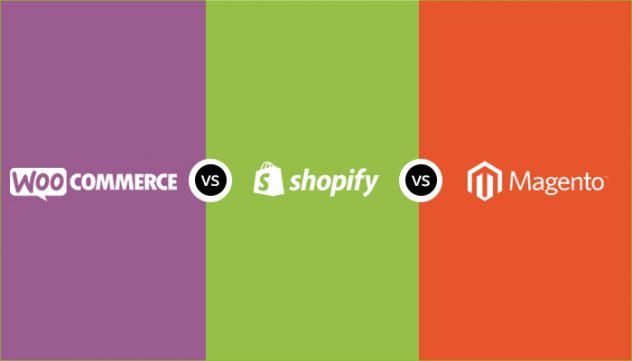 For millions of brands, that means choosing between three leading platforms: WooCommerce, Shopify and Magento. According to BuiltWith, well over a quarter of the world’s one million top websites feature eCommerce platform technology. WooCommerce dominates with 27% of these, while Shopify claims 20% and Magento 9%.

Here, we compare all three side by side!

WooCommerce vs Shopify vs Magento – the basics

All three are eCommerce platforms capable of handling (or being expanded to handle), all aspects of online sales. They can also take on ‘bricks and mortar’ operations, such as managing inventory and powering in-store transactions. All three solutions have been around for at least a decade, but they follow pretty different philosophies.

WooCommerce vs Magento vs Shopify – features and ease of use

It’s hard to separate the three platforms on features. Each supports just about any eCommerce operation you can imagine and can be expanded with plugins or apps. As open-source products, WooCommerce and Magento have the advantage that you can inspect their code and modify them to suit your needs.

There’s no doubt that Shopify has the edge in setting up and ease of use. Because it’s hosted, you just need to sign up and start building your store. WooCommerce offers a similarly smooth experience, but you’ll need to set up a WordPress website first.

Magento Open Source and Magento Commerce are harder to install. You’ll need to host them yourself, which is a bit more involved than setting up WordPress for WooCommerce. Once installed, they’re generally easy to configure, but they can throw up some technical challenges.

Whilst all three platforms support sites with high volumes of traffic and sales, Magento has better scalability built-in, with out-of-the-box features to support heavy traffic. This is a major differentiator in favour of Magento.

WooCommerce vs Magento vs Shopify – support and security

As you’d expect, you’re likely to get better support for a paid eCommerce platform. All Shopify subscriptions get 24/7 support, as do Magento Commerce and Magento Hosted Cloud.

With free, open-source platforms like WooCommerce and Magento Open Source, support comes from the community. Here, the huge WooCommerce and WordPress ecosystem is an advantage – there’s a bigger knowledge pool and a larger community of expert WooCommerce developers.

All three platforms are regularly updated and highly secure, but there are differences. With Shopify and Magento Hosted Cloud, security is maintained for you – it’s also simpler to implement industry standards such as the Payment Card Industry Data Security Standard (PCI-DSS). For self-hosted platforms, you’ll need to apply any patches or other updates promptly, and you’ll be responsible for ensuring and reporting PCI-DSS compliance.

Even with free platforms, it’s likely you’ll end up using several paid plugins or apps. These generally come with support, but also at a cost.

WooCommerce vs Shopify vs Magento – costs

Free eCommerce platforms would appear to win hands down on costs, but it’s not quite so simple in practice. WooCommerce and Magento Open Source are free, but your web store still requires a domain and suitable web hosting. In addition, you’ll probably need to pay for some additional features, such as a design theme or various plugins or apps.

Monthly Shopify subscriptions range from fairly cheap upwards, however, you’ll probably end up adding to your subscription with chargeable apps. If you choose to use a third-party payments service (rather than Shopify’s own), you’ll also pay a levy of up to 2.0% of every transaction.

Magento Commerce is more expensive, reflecting its enterprise focus. Maintenance costs for Magento are also likely to be higher.

All three platforms are proven; it’s more about finding one that suits your budget, needs and skills. Unless you’re running a large enterprise, it’s hard to justify the cost of Magento Commerce or Magento Hosted Cloud. Magento Open Source offers many of the same features, but it’s quite complex to install and maintain – and you don’t get access to the same support.

Shopify is a great off-the-shelf experience for brands lacking technical knowledge – particularly if they’re launching a new website rather than looking to integrate with an existing one. However, its proprietary ecosystem means you don’t get full ownership of your data, and you can’t get your hands dirty in the code to build a completely bespoke store.

Which leaves WooCommerce. While it’s not quite as straightforward as Shopify, it strikes an outstanding balance between ease of use, features, support, and costs. It can and does scale from micro-businesses selling handfuls of goods to the most prominent global brands.

BrightMinded designs, builds, and supports web stores for a wide range of customers and requirements. If you need experienced, custom eCommerce development to help your online shop succeed, drop us a line and let’s chat about how we could help you.