Should I fix a car dent myself or use a service?

Looking after and maintaining a car is on some level compulsory, we can’t drive around in an unsafe vehicle. If a car has some serious damage, you’ll need to send it to a repair garage to get it fixed. When it comes to car dent repair, however, you may be able to do the work yourself. 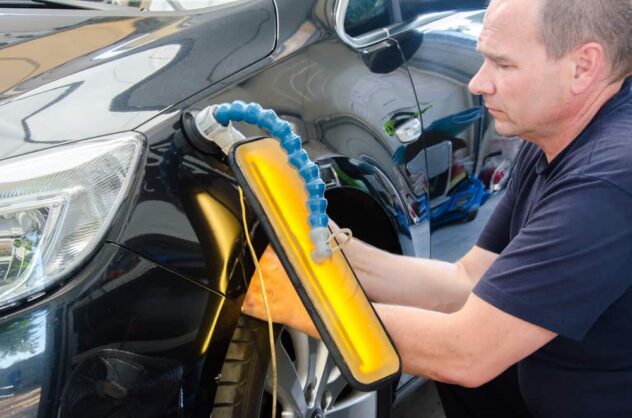 In cases when the damage is minor, such as a small or shallow dent. Fixing it yourself can be cost-effective and efficient. With just a little knowledge and the right tools, minor dents and dings can get fixed up in no time.

If you are looking to work in car dent repair, starting small is a good way to get a foot in the door. There are some simpler do-it-yourself methods to remove small dents, they are cost-effective and easy to do. These methods are perfect for fixing smaller dents that aren’t caused by damaged metal.

How to get a dent out of a car

Using a hairdryer and dry ice

Find yourself a hairdryer, as well as a towel, rubber gloves, and a package of dry ice. First, you want to heat the dent with the hairdryer from 6 inches away. This will increase the temperature of the dent. Next, cover the dented area with a towel. For this next part, put on rubber gloves, or some other form of protective gloves, before handling the dry ice. You will want to place the dry ice on the towel or wrap it up, so it won’t scratch the paint. After a few minutes, the dent should pop out. This method can be a little difficult, so it is recommended to research beforehand. There are also methods that use just dry ice or just a hairdryer.

For slightly bigger dents, a plunger can work miracles. This method is much simpler as the only tool you need is the plunger and some water. Cover the plunger and dented area with water first, then attach the plunger to the dented area and push it up and down until the dent pops back into place.

The short answer is yes, they can work, though you might need some prior knowledge. A car dent repair kit comes with an array of tools to help maintain your vehicles. From compression grips, metal taps, steel dent lifters, rubber hammers, glue guns and much more. These tools can be used to effectively fix any shallow or small dent your car might be suffering from. When a car receives a dent, fixing it as soon as possible is a must if you want to avoid further damage or damage to the paintwork.

Usually, car dent repair kits require at least some knowledge of how to fix a car dent beforehand. However, some kits come along with an instruction manual to help you along your way. If you are looking to start a career in car dent repair, getting one of these kits and learning everything you can is a good start.

There are plenty of car dent kits to choose from, each with its own tools to help fix a dent. If you are looking for a comprehensive kit with a wide array of tools, or something simpler, there are guides out there on which is best for you. There are kits for bigger or smaller dents, so research which one is best for you.

Should you use a car dent repair company?

A car dent can be anything from a small ding to a large dent. There are plenty of ways to remove a car dent and repair your car at home. However, many of these methods are for small or shallow dents, without any serious damage to the metal. If your car has suffered something more substantial, or if you lack the knowledge and tools to get rid of it, then using a car dent removal company is ideal to help repair your vehicle.

Car dent removal and repair services like The Dent Men have a range of car dent options to fix up your vehicle and make it good as new. Below are some of the services they offer.

They also come to you; all their tools can fit into their vehicle so they can reach you wherever you may be. Paintless dent removal also means that you don’t have to have your car repainted afterwards, so if you use a car with advertising, you won’t have to replace it. They offer top of the line car dent repair as well as training for any learners. If you are interested in a career in car dent repair and removal, then joining The Dent Men could be a prospective career choice.

The vital importance of facilities management to a business

Guide to prolonging the life of machinery