When a car gets damaged with a dent, you might be able to fix it yourself if it’s small or shallow. If the dent is too large, however, you might want to contact a car dent repair specialist. 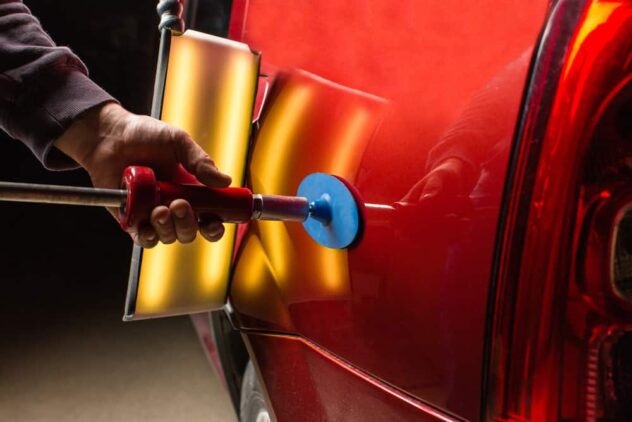 If you are interested in becoming a car dent repair specialist and start working with cars, then The Dent Men could be right for you. Read on to learn more about The Dent Men and what they can offer you.

Who are The Dent Men?

The Dent Men are car paintless dent removal specialists. Paintless means that they fix the dents without repainting or use of filler. They are also fully mobile, meaning that you will be going to clients, with all tools being able to fit into a vehicle. This means that clients don’t have to send their cars off to a workshop, instead, they operate via messaging.

Clients can message The Dent Men, providing an image of the dent to their car or van, including a description of the damage and car model. The Dent Men then provide a quote. If the quote is agreed upon, then they will move forward with their service.

The services that they provide are:

Training with The Dent Men

With a wide range of services and fixes available, The Dent Men also provide training to suit you. If you are wanting to get into car dent repair, then their range of training courses can put you on the right track. From a 5-day PDR training course to a 1-day glue-pulling course, The Dent Men offer training for beginners and more experienced individuals.

So, if you are looking to start work in car dent repair, but lack the expertise, there is training available to help you become a dent specialist in no time.

Why you should become a franchisee with The Dent Men

Becoming part of a franchise can be daunting, but now is a great time to get a foot in the door. The franchise industry contributes £15 billion to the UK economy, and over half of franchisees declare an average turnover of over £250,000. The automotive industry is quickly growing, with an ever-increasing demand for cheap and effective car repair services. It is a competitive market with many opportunities to prosper. Running a franchise can be lucrative and highly profitable, but why franchise with The Dent Men?

The Dent Men give plenty of benefits such as choosing your own hours, allowing you to fit work around your family life. The support offered by The Dent Men means that there will be help every step of the way in building a successful business. You are also given the tools to succeed from the beginning. You are given free reign on your career path, and with support and training, there is a lot of opportunity for mobility and success.

What opportunities are there?

As a franchisee, you will be given the tools to operate in an exclusive territory. With a mobile workshop, you can provide customers with cost-effective, efficient, and excellent service at a place that is good for them. Clients will contact you either via text or WhatsApp, allowing you to quickly respond back with an accurate quote.

There are plenty of opportunities that come with this to help you succeed:

All tools and marketing material are provided to you. Allowing you to work as you please and reach out to people however you want. If you ever need any support, The Dent Men are always available to help you no matter what it is.

Start a career in car repair and enter a growing industry with The Dent Men. If you feel that this opportunity is the right fit for you, then contact The Dent Men today!