Wetland is an umbrella term that covers swamps, marshes, and bogs that differ in peat content, elevation, terrain, and vegetation. 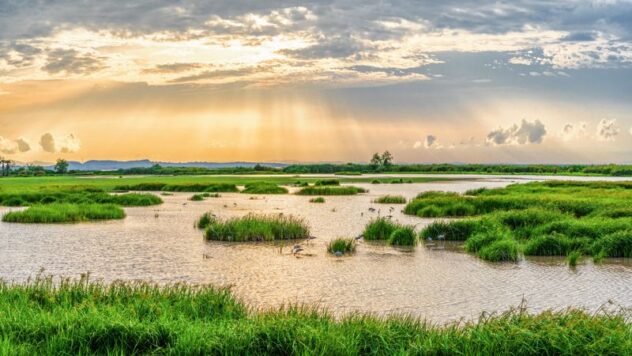 For a long time, wetlands were believed to be a waste of land and were considered unnecessary when it came to the conservation of soil. However, this misconception once led to unwarranted drainage programs that had an adverse impact on the environment.

In fact, wetlands are an integral part of nature. First of all, they are heat accumulators as they do not freeze сompletely even in severe frosts. Thus, it is no coincidence that many species of plants and animals can grow and survive in wetlands only. More so, wetlands are the “lungs of our planet”, reducing the amount of carbon dioxide in the atmosphere, providing benefits comparable to those of forests.

Oddly enough, wetlands are also great water filters, capable of naturally improving water quality. This is of particular importance to farming since agriculture is among the main offenders when it comes to water pollution from chemicals runoff. On the other hand, territories obtained from the drainage of wetlands are used for crop cultivation. But is it beneficial in the long run? Or are restored wetlands more helpful to farming?

What is Wetland Restoration?

Wetland restoration implies the recreation of wetlands in the exact locations where they used to exist. How is it possible? For instance, the removal of drainage structures from a particular farmsite will cause water to return to the ground surface, leading to the restoration of a wetland that was there before this agricultural field.

However, wetlands can be not just restored but created on sites where they have never existed before. Unfortunately, such practice is usually unsuccessful, because it entails forcing new flow patterns for water, making the outcome unpredictable.

So, which wetlands can be restored or enhanced? Here are some of the characteristics:

Wetlands can help enhance agricultural practices in many ways. Among the main benefits they offer are:

Unfortunately, people still consider wetlands, if not an enemy, but a useless part of the territory that could be exploited with greater benefit. Therefore, the main issue for the conservation and restoration of wetlands is their drainage for further use in agriculture or peat extraction. As a result, there is a loss of animal habitats, a sharp change in the hydrological regime of streams and rivers, and an increase in the number of fires. And all of this has negative effects on both agriculture and the environment in general.

Therefore, wetland seems to benefit crop production better when restored rather than drained. Wetlands help maintain and improve farming productivity, and their environmental functions and economic values should be incorporated into agricultural activities planning.

How to earn by growing vegetables in a greenhouse?