The British Franchise Association (bfa) has revealed the most exceptional franchise businesses of the last 12 months at the bfa HSBC Franchisor of the Year Awards 2016. 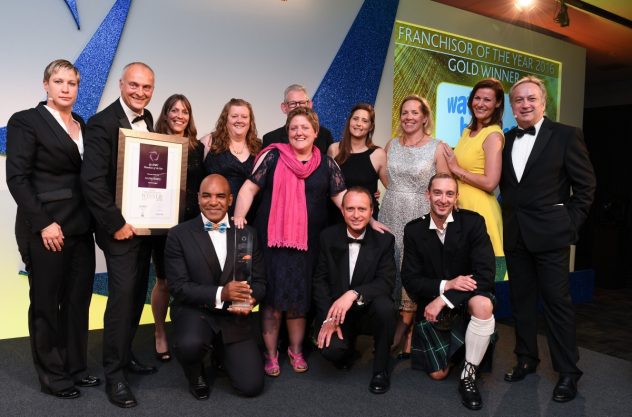 Water Babies capped a phenomenal 12 months by taking home the top honour after being named Franchisor of the Year 2016, the highest accolade in the sector, in front of over 350 guests.

Paul Thompson, founder of Water Babies, said: “To be recognised by your industry as being the top franchisor is a fantastic accolade. It brings together 14 years of really hard work and it’s a collective effort for our whole franchise network, it’s all of us that did it. It’s very much ‘we’ that have won. That makes it extra special.”

The Devon-based baby and toddler swimming franchise was praised for its record of constant innovation and development. In the last year alone it launched, in parliament, the first-ever British standards for the safety of babies and toddlers during swimming lessons; built its own aquatic facility in China as part of impressive international expansion; created a new service for pre- and post-natal mothers; and became a published brand with a series of books planned.

Also celebrating was Home Instead after picking up two awards, including Silver in the same category, for its franchising standards, ethics and franchisee recruitment methods. Expense Reduction Analysts (ERA) won Bronze for its highly collaborative business model and performance.

There was also recognition for McDonald’s, honoured for its innovation after the biggest revamping programme in its UK history, while O2 was praised for combining corporate and franchise techniques to create a strong culture of customer service. Busylizzy was named best new franchise for its modern, technology-led approach to mother and baby fitness classes and the flexibility and results it offers franchisees.

bfa HSBC Franchisor of the Year

Emerging Franchisor of the Year: busylizzy

Andrew Brattesani, UK head of franchising at HSBC, said: “The awards are a celebration of exceptional businesses. Extraordinary achievements are required to triumph and our winners displayed them in abundance, highlighting the quality, dynamism and diversity that’s found in franchising today. Everyone in the sector should be proud of them.”

The bfa’s CEO, Pip Wilkins, added: “As judges, we demand substantial evidence of quality, a comprehensive understanding of franchising ethics and proof of consistent franchisee success. Our winners have distinguished themselves through their accomplishments and these awards pay testament to their sustained franchising excellence.”

The awards are the oldest and most prestigious in the £15bn franchise sector, having been established nearly 30 years ago.

International business expansion: Getting it right from the ground up

Why politics matters for business

10 ways to get the creative juices flowing in your business

Dominic Lill - March 30, 2016 0
Creativity and innovation is needed in all businesses, but too often businesses owners can get so swept up in the day to day that...