No one can trace gambling’s true origins. Yet, it is safe to assume that this activity has been around since people became aware of concepts such as commodities and trade. Historians believe that its roots date back to the Paleolithic period. However, in a modern context, this pastime exploded in popularity post-WWII. At that time, Las Vegas established itself as a mecca for gambling innovators and the center for all things chance-based.

Nowadays, Sin City has taken a backseat as other hotspots have emerged, and the internet sector has started to make massive strides. Many active pioneers of casino-style gaming still hail from Vegas, even though the sphere is now more international. with gambling innovators based in countries like the UK and Malta. Particularly when it comes to digital brands, whose gaming arsenals are chuck full of varied products, but online slots continue to be the cash machine for these companies. 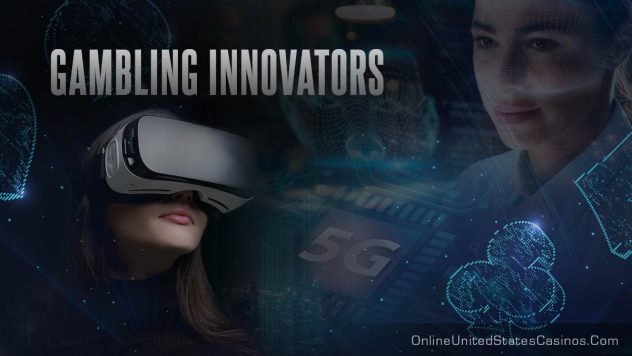 International Game Technology (IGT) is a powerhouse in the world of gambling. Per many industry experts, it is the largest supplier of gaming products on the global market. American businessman William Reed founded it in 1975 as A-1, and it got acquired in 2015 by Gtech, who moved the company headquarters from Las Vegas to London. IGT is the company behind the first progressive slot ever, Megabucks, which it invented in 1987. In 2003, this game paid out the largest slot prize of all-time worth £28 million.

WMS Industries is another old-school giant that got founded in 1974 in Chicago. It merged with Scientific Games in 2016 and now operates under that Vegas-based corporation’s umbrella. Scientific supplies table game rights, electronic shufflers, lottery systems, and more to gambling venues. WMS made its mark on this sector by creating the first game with a bonus round – Reel ‘Em In (1996). These sorts of machines had existed previously in Australia, but they became a worldwide phenomenon thanks to WMS’s product.

Microgaming has a special place in the history of interactive gaming. It launched its operations in 1994 when the industry became active thanks to Antigua and Barbuda’s Free Trade and Processing Act. That same year, this company cemented themselves as gambling innovators when at their headquarters on the Isle of Man they developed the world’s first online casino software. In 2016, Microgaming also produced the first virtual reality gambling game, VR roulette. It is also the inventor of the most famous online progressive slot of all-time, Mega Moolah.

Playtech is a UK company formed in 1999, whose stocks trade on the London Stock Exchange. It is currently on a quest to conquer the US market. It has embarked on this journey by making massive moves in New Jersey. In 2003, it created iGaming history by going live with the soft launch of its Manila, Philippines live studio that provided Asian-market games. It was the base for the first live dealer casino on the internet and remained the only option of its kind for the following three years.

Speaking of live dealer tables, Riga-based Evolution Gaming started its operation in early 2006 and is now likely the most sizeable entity in the online gambling space. In 2020, it took over 96.8% of NetEnt for approximately £1.6 billion. Evolution has been the leader in live table action since 2009, and it pioneered the game show genre with the launch of their Wheel of Fortune-type game – Dream Catcher, in 2017.

Malta is home to many gaming innovators due to its lax stance on online gambling. Betsoft got founded in Lytham St. Annes, Northern England, but after treading water for years, it moved its operation to Malta. Betsoft’s first big success came in 2008 thanks to the development of their Slots3 series, which incorporated stunning 3D graphics and innovative bonus features. Over the years, Betsoft established itself as the industry’s top 3D developer, and in 2019, it was the first big-name provider to branch off into shooter-style skill-based products with its Max Quest series.

On the brick-and-mortar side of things, GameCo is another Las Vegas company that has brought forward gambling novelty. In 2016, it debuted the world’s first skill-based video games in casino properties in the US. Its Danger Arena is a first-person shooter where you can win real money prizes for shooting down enemies, the first title of its kind. In 2020, GameCo received approval from New Jersey’s Division of Gaming Enforcement to launch similar products for the state’s residents online.

All hardcore gamers know Atari. It is a Sunnyvale, California brand that released the Atari 2600, the home console that revolutionized video games. It popularized microprocessor-based hardware and swappable ROM cartridges, setting the stage for things to come. In 2021, Atari will launch the first-ever virtual casino in the Ethereum-blockchain metaverse Decentraland. There, Decentraland users can socialize and play games for crypto tokens in a 3D environment.

Shelly Schiff has been working in the gambling industry since 2009, mainly on the digital side of things, employed by OnlineUnitedStatesCasinos.com. However, over her eleven-year career, Shelly has provided content for many other top interactive gaming websites. She knows all there is to know about slots and has in-depth knowledge of the most popular table games. Her golden retriever Garry occupies most of her leisure time. Though, when she can, she loves reading Jim Thompson-like crime novels.