If you’re reading this, that means you’re either assessing HBO Max as an option or were part of the tech issue that plagued its subscribers. 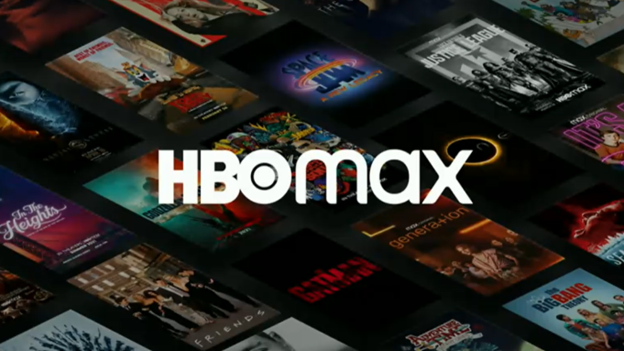 There is no doubt that the streaming service has faced minor issues in the past. It was minor until it got piled up with other tech problems and that’s what we’re going to talk about.

Of course, these issues were faced exclusively by the US audience. If you’re outside the US, you must’ve used a VPN. Nowadays, you can use a VPN to watch HBO max in the UK, Australia, Asia, etc., and get access to all HBO Max content.

But in this article, we will take you to July when the headline of “Glitches in HBO Max” was everywhere. Of course, since then the situation has improved but we only recall this as a part of history HBO Max has improved. Let’s get started with the tech issue in detail.

Bloomberg voiced the concern of its frustrated subscribers about glitchy tech in the HBO Max App. The real data shows that users who used Roku for streaming faced persistent crashing of the app. Also, it was reported by many that, amidst the streaming giants, HBO Max encountered the most bugs for several months.

According to Down Detector, a service that tabulates consumer tech complaints on Internet Service Providers and Streaming Services, HBO Max amassed over 10 customer complaints in July for “unexpected outages”. Almost 60% of these complaints were specific to the “Video Streaming” part and 28% were about log-in. This was concerning for the company since it just made its debut in the market in 2020.

Back in June, users who had Apple TV to stream HBO Max voiced their concern about how the app doesn’t let them fast-forward and rewind. There was also the issue of the “next episode” popup that wouldn’t leave the screen. It also lost the power to turn HDR functionality off during Standard Definition play. Some users took to Reddit and complained about Siri voice commands not working and mismatching subtitles.

Now we are talking about its issue but let’s be reminded that, compared to streaming giants like Amazon Prime, Netflix, and Hulu, HBO Max is the newest contender in the market. It does take some time for issues to be discovered and dealt with. Even Amazon Prime and Hulu got up to 4 user complaints each in the same month and Disney Plus got 10 complaints.

It was reported from statements of WarnerMedia that the traces of the bug came as part of the 10$ ad-supported package launched in June. In just a few weeks, it was reported to expand into 39 new territories. This launch turned into a roast due to the non-anticipated tech challenges.

Bringing commercials to an ad-free platform involves redesigning and recording new layers in the app. This coding would then need to be made technically strong and clear from any risk of loss. At the same time, there was the HBO Max Originals that needed to be made part of the new tier, which required a lot more workforce and bandwidth.

The reason this restructuring is necessary was also that the app wasn’t built from scratch like Netflix or Hulu. HBO Max’s predecessor was the old HBO Go and HBO Now service. They held a great position in the eyes of viewers but they both had different purposes.

WarnerMedia talked about how they didn’t want to disappoint hundreds and thousands of users by an unexpected crash during a simultaneous stream. They commented, “That program was built for scale, and it was rock solid,” It is challenging to integrate the new technology on the existing platform, and subscribers around the world were let down.

The Signs of Improvement

HBO Max amassed a total of 29 complaints in May and 36 in July. After this fiasco, HBO Max addressed its customer complaints in the newest updates. Andy Forssell, who is one of the executives for HBO Max, promised the audience a strong check on “Version 50.30.2.261”.

Regarding the complaints in June, HBO Max tweeted about the situation and said, “We just released an update to our Apple TV app, restoring the native tvOS video playback experience you know and love, with more improvements to come, ensuring HBO Max viewers have a quality experience is our top priority and we missed the mark here.”

There are also talks of HBO Max ready to roll out a completely new app. The Woebegone Roku and PlayStation users are expected to be the first to get the new Max App. Apple TV customers may have to wait till early 2022. 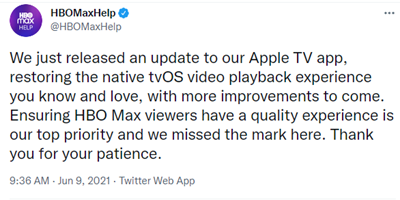 It is highly unlikely for HBO Max subscribers to leave the platform due to bugs. Although the tech issues are still on their way to being resolved, you cannot argue about the level of content HBO brings. The most highly-rated shows and movies belong to HBO Original Programming.

Not to mention that HBO Max has been responsive throughout the entire complaints. They’ve been hard at work at improving the user experience and many users have responded positively to the updates. We only hope that they consistently eradicate the tech issues and improve the user experience.

Amazon Prime video revenue statistics and facts in the UK