Imagine you get to work in the morning, and before you know what’s happening, it’s 5 o’clock. You check your tasks for the day and see that you should stay for some extra duties to get it off your desk. As darkness falls, there is no need to put on the lights. 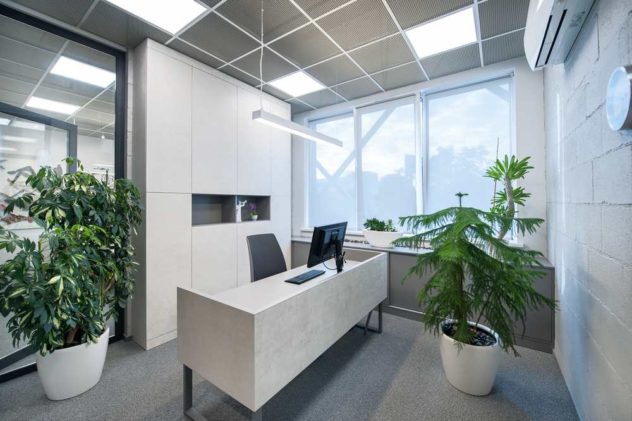 Here’s another scenario: your desk is far away from the window in the office space. The arrangements won’t permit you to adjust your chair, so you have to deal with the current arrangements. Thus, it is necessary to switch on the lights even though it’s daytime. This is where LED lighting comes in.

Much has been said about the importance of lighting in the office; everybody needs light to get things done. And, yes, that’s true: good lights can boost your productivity. Do you know that it’s not an easy task to choose proper lighting for office? This article will prove expository in helping you decide which light, fluorescent or LED lighting, is ideal for your office in order to boost your productivity and create a comfortable working environment.

Many things contribute to productivity. One of the important factors is mental alertness. To keep yourself or your employees mentally alert, you have to organize the best working environment. A recent study shows that when your office is well-lit, it can increase your productivity by almost 15%. It also contributes to the overall job satisfaction of some 25%.

So, the question arises: should you go for a fluorescent bulb or a LED one?

There is nothing better than natural daylight, but with enclosed offices, you can’t do without lights. So what is the best lighting? Yes, the one, closest to the daylight. LEDs mimic daylight almost perfectly, and thus it makes them perfect for offices. Fluorescent lights, however, are artificial but affect the brain in ways that LEDs cannot.

Another advantage of LEDs over fluorescent bulbs is the level of brightness and the wavelength in its ambiance nature. It’s far better because it makes the brain process information faster, it improves alertness and performance, and it also makes the quality of sleep better. Apart from that, it puts workers in a good mood (especially is this good for customer care representatives).

The light can affect more aspects of your life and body than you think. For example, your blood pressure, heart rate, response to a stimulus, and body temperature. If you are inspired to shop for quality LED lighting, you can do that at different shops like scotlight. There are wide varieties you can choose from, at affordable prices.

Why fluorescent isn’t a match?

Fluorescents aren’t so bad: for example, they won’t give illumination. However, in the article, we are focused on employee productivity. For someone to be productive, they must be performing at the top level. Fluorescents are known to be brighter than LEDs. And as for bright lighting, it can be aggravating some common conditions of the brain like headaches and migraines.

Another reason why fluorescent light is not the best choice for office is it can affect the secretion of melatonin – a chemical produced in human’s bodies that helps us fall asleep. For those that spend the day working under the bright fluorescent light, they may not find it too difficult to sleep at night. The reason is the effect of the fluorescent on the melatonin will have diminished before bedtime. But for those who spend their evenings working under fluorescent lights, they may experience some difficulty sleeping at night, o being too sleepy during the daytime.

Fluorescents are also known for emitting radiation, which may cause some health troubles later in life.

It is clear that the best lights for your office are not fluorescents but LEDs. About 24% of employees in a popular advertising company in the United States did admit the bright light has caused them some measure of eyestrain and other mental discomforts.  However, no employee made such negative comments about LEDs.

Lights are important in the office space, and when deciding on the lights you want in your office, go for LED lighting as they are less consuming, boost productivity and have no negative health effects. Be determined to create a better work environment for yourself and your employees.

How to set your small business up for less