Taiwan is considered a small country, but it has a population of more than 20 million. It is also the largest country in the world that isn’t in the United Nations, due to tension with its neighbor to the west.

Like Hong Kong, Taiwan ranks high on the World Bank’s ‘Ease of Doing Business’ surveys. However, its working culture is very different from what most Westerners are familiar with. This is why it’s important to understand the business climate there and be ready to adapt. Let’s learn more about starting a business in Taiwan and the issues you may face. 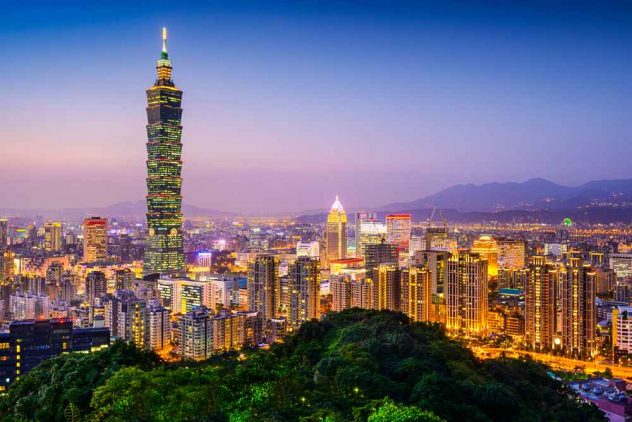 There are a few procedures you have to follow to start a business in Taiwan. You’ll need to choose a name not used by any existing businesses first, apply for incorporation, then complete your tax registration. You may need to meet various insurance requirements in order to start a business too.

Businesses must also submit an audit report proving that the amount of capital invested can cover the company’s establishment costs. This is just what is required to get started.

You should also know that the construction industry in Taiwan has far more red tape than other market sectors if you need to build a new building. One area where Taiwan falls behind is its power grid. It can take 3 to 4 weeks to plug a property into the power grid. In contrast, registering property rarely takes longer than a week.

Enforcing contracts can also be a challenge in Taiwan. You have to go through 45 different procedures. Filing and service alone can take a month. This is why enforcing a contract can take more than 500 days.

Business hours are typically 9am to 5.30pm Monday through Friday. Dress codes tend to be conservative and formal. Women may need to change their regular dress code as things like pantsuits aren’t a common thing there when it comes to business attire.

Gift giving at meetings is common, though these are small tokens. Also know that relationship building is considered paramount in this culture, equal only to the concept of “face”.

“Face” is a concept tied to dignity, reputation, and prestige. Both individuals and companies have “face”. It is considered essential to “save face” and avoid embarrassing others. That’s why you must never say anything that shames a company. Embarrassing a group of visitors will also hurt your ability to do business. Failure to maintain face with individuals could destroy business negotiations as well. One of the things you should do, for example, is always speak directly to the most senior person in any gathering.

On the other hand, the concept of face can hurt day to day operations, since employees may be unwilling to point out others’ mistakes. Helping their colleague maintain face can often be seen as more important than getting things done right.

This could also lead to a variety of issues with your workforce that only someone on the ground with a solid understanding of Taiwanese business culture will be able to understand. So, you, as an employer, may have difficulty deciphering some of these subtleties, and you could start issues with your staff, management, or the whole organization.

One solution could be to work with a PEO like New Horizons. They can act as a Taiwan PEO & employer of record (EOR) and help manage employees they’ve hired on your behalf. They can help set up payroll and benefits, among other things. This service can help you comply with Taiwan’s labor laws and take on the liability of an employee’s mistakes as well.

Speaking of management, Taiwan still has a very top-heavy power structure. There is this expectation for senior managers to take on a paternal role in the organization and to be consulted on every decision. So, this is not the most ‘lean’ country as far as management goes, and you can expect to get serious pushback not only from managers, but from employees if you’re trying to export your current processes without adapting them.

A greater challenge for foreign businesses getting started in Taiwan is the language barrier. Most people speak Taiwanese (Hokkien) and Mandarin Chinese which is very close to that spoken in Mainland China. So, don’t expect to get addressed in English in business meetings or assume that there will always be someone there who speaks English.

While some speak English, it is rarely spoken outside of big, multinational businesses. You may find more Taiwanese fluent in Japanese because they attended school there. Expect to require assistance from translators. They’re most likely to be based in major cities like Taipei.

One thing you have to be ready for is financing, as getting credit in Taiwan can be tough for a foreign investor. The lack of a public registry is often thought to be the cause of this. On the other hand, however, Taiwan has excellent investor protection.

Also note that Taiwan uses its own currency, the New Taiwan dollar. While it is not considered as strong a currency as some of the neighboring ones, it does have benefits as far as trading goes. The weaker dollar makes buying and exporting Taiwanese goods a sound business proposition. The country is also very economically stable, which is another major plus.

Another thing you’ll have to be prepared for is Taiwan’s extremely complex tax code. It is estimated that taxes in the country take around 220 hours a year to complete. So, you have to make sure that you work with a reputable accountant that will allow you to avoid common pitfalls. This is also where a PEO will be able to help.

There are also multiple levies that would be unfamiliar to foreign business people. For example, there is stamp duty owed on all contracts. There are city house taxes and a vehicle license tax.

You also have to know about insolvency laws and procedures in the country before thinking of doing business there. Know that the process is much more complicated than in America. In the event that your business becomes insolvent, it could take nearly 2 years to resolve matters, so be prepared for that. However, the recovery rate of roughly 80% is considered high and insolvency proceedings themselves are relatively cheap.

Taiwan depends heavily on foreign trade, which is an advantage. The country makes it easy to import and export goods. Items typically cross the border in less than 10 days and at a relatively low cost. You only have to fill out about half a dozen forms to ship items outside of Taiwan.

Taiwan excels when it comes to transportation infrastructure. There are several world-class seaports here, though Kaohsiung is the only city with an international airport. This is why most international firms are located within twenty miles of Kaohsiung. The delivery of raw materials and components from Taiwanese firms is very fast as well.

Taiwan has one of the most business-friendly climates in the world. However, this doesn’t mean that doing business in Taiwan is not without its challenges. Make sure that you are aware of those, and have a solid team on the ground to guide you through.

Shareholder protection: Is your business protected should the worst happen?

Health tech is ripe for investment: here’s how to attract it